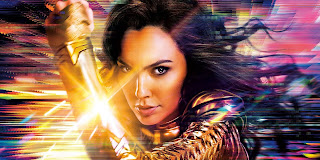 Aside from some weak CGI, I found "Wonder Woman 1984" to be a lot of fun. It's a charming, noisy, and rambunctious movie that both takes itself seriously and embraces its ridiculousness simultaneously. Everyone is having a good time in their respective roles, whether they're chewing up the scenery around them or bringing the audience some sincere moments of heart and emotion. Some might be turned off by the ending of the film, but I found it refreshingly optimistic.

If I were to compare the tone of this to any other comic book film, "Thor: Ragnarok" comes to mind immediately. As far as DC comparisons, it much more like "Aquaman" than "Batman v. Superman." I found "Wonder Woman 1984" to be another step in the right direction for DC's cinematic universe.
Patty Jenkins directed "Wonder Woman 1984." The movie came out in 2020 and is in limited theaters right now. It's rated PG-13 for sequences of action, violence, and some language.
Newer Post Older Post Home