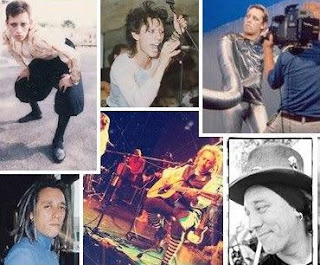 If you grew up on a steady diet of Christian alternative, punk, and metal in the late 1980's and early 1990's, there's no way you could have avoided hearing about Scaterd Few. Scaterd Few was quite possibly the most controversial band coming out of the Christian music industry at that time. From their outward appearance and the way they sounded to the things they sang about and the rumors of "questionable" behavior at festivals and concerts, they made a lasting impact on angst-ridden and rebellious kids like me who always liked to push the envelope of what it meant to be an "acceptable" Christian teen.
Vocalist and songwriter Allan Aguirre was the face everyone associated with Scaterd Few. Much like KISS has Gene Simmons with his Demon makeup and fire-breathing, Scaterd Few had Aguirre screaming and wailing about drive-by shootings, drug use, killing your flesh, and other "taboo" subjects CCM artists were too scared to talk about in front of a safe youth group crowd. From the dreads on top of his head to the lipstick and makeup on his eyebrow-less face, Aguirre set the precedent for what was to become the norm in the underground Christian music scene.

Fast-forward some thirty years and Aguirre is now the overseer of Chameleon Church, which he describes as "a gathering of non-denominational / Spirit-filled Believers of the Way established in the scriptural roots of the faith." He is also the author of three books centered on spirituality and the Owner / Director of Operations for a publishing and clothing company. Let's not forget to mention he is planning to work on some new music soon.

Needless, to say, there was plenty to talk to Allan about when I sat down with him for this interview. We chatted a little bit about "Music" before diving heavily into the "More" category of the website's name. To lighten the mood, we did talk superheroes and "Movies" as well.

Jump right into one of my favorite conversations I've had with anyone and get ready to have your beliefs and faith challenged. Let's just say Allan Aguirre definitely doesn't swim with the current. Did I mention he is one of the most sincere and dedicated men I've ever come in contact with. Oh yeah, and a childhood musical hero to me as well. I probably didn't have to say that, though.