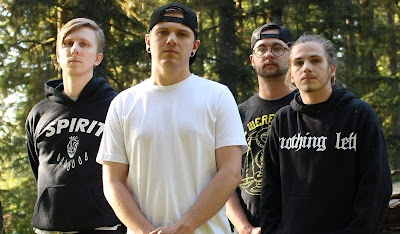 If I were still a music mogul like I was back in the days when I helped run Pluto Records (I kid, I kid), Sight Received would have been a band that showed up on my radar as soon as they graced my ears. Mixing elements of radio-friendly rock with dashes of post-hardcore and metal, this four-piece group out of Olympia, WA have all the right ingredients. Not only could they dominate the airwaves and land on countless streaming playlists with the right support, but they have what it takes to win over even those who prefer their tunes on the heavier side of things as well.

The members of Sight Received cite influences which range from Bush and Breaking Benjamin to Impending Doom and even Silverstein. The crazy thing is, you can actually hear it in their songs. Vocalist Kristian Bullard sings his way through flowing verses before screaming out passionate choruses. Meanwhile, guitarist Nick Burgess melds together both melodious lines and heavy riffing that will bring to mind Disciple, Nine Lashes, and Seether if they had just a bit more edge.

Sight Received just released their album "Worthless Gold" and it gained my attention as I added their singles to my Radical But Responsible new music playlist. I immediately contacted the guys to find out more about what makes this talented band tick. I ended up sitting down with singer Kristian and guitarist Nick for an entertaining and informative conversation. Not only did we talk about their music and new album, we also blathered on about movies, comic book characters, and other such nonsense we love.

For more information on Sight Received, you can check them out on their Facebook page.