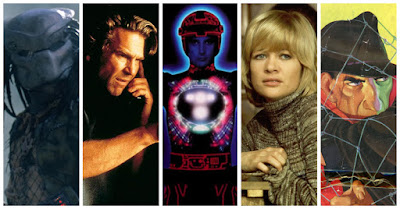 Brought together on a mysterious planet, a mercenary (Adrien Brody) and a group of coldblooded killers now become the prey. A new breed of aliens pursues the ragtag humans through dense jungle. The group must work together to survive, or become the latest trophies of the fearsome intergalactic hunters.

Widowed when his FBI agent wife is killed by an extremist group, college professor Michael Faraday (Jeff Bridges) becomes obsessed with the culture of these groups -- especially when his new all-American neighbors, Oliver (Tim Robbins) and Cheryl Lang (Joan Cusack), start acting suspiciously. With each twist, the mystery deepens and questions loom as to whether Faraday is consumed by fear and driven by paranoia, or whether a lethal conspiracy has been born on Arlington Road.

When talented computer engineer Kevin Flynn (Jeff Bridges) finds out that Ed Dillinger (David Warner), an executive at his company, has been stealing his work, he tries to hack into the system. However, Flynn is transported into the digital world, where he has to face off against Dillinger's computerized likeness, Sark, and the imposing Master Control Program. Aided by Tron (Bruce Boxleitner) and Yori (Cindy Morgan), Flynn becomes a freedom fighter for the oppressed programs of the grid.

A prep-school headmaster's (Peter Cushing) wife (Joan Collins) and her lover try to drive his spouse (Judy Geeson) to kill the schoolmaster.

Lamont Granston assumes his secret identity as "The Shadow", to break up an attempted robbery at an attorney's office. When the police search the scene, Granston must assume the identity of the attorney. Before he can leave, a phone call summons the attorney to the home of Delthiern, a wealthy client who wants a new will drawn up. As Granston meets with him, Delthiern is suddenly shot, and Granston is quickly caught up in a new mystery.