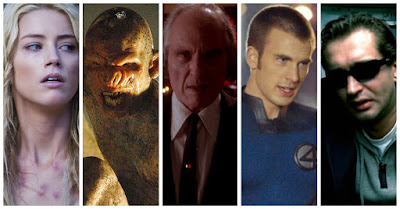 In John Carpenter's last directorial effort, Kristen wakes to find herself bruised, drugged and held against her will in a remote ward of a psychiatric hospital. Other patients, four equally troubled girls, and Kristen quickly realize things are not as they seem - and that they are not alone.

A year after a severe emotional trauma, Sarah (Shauna Macdonald) goes to North Carolina to spend some time exploring caves with her friends; after descending underground, the women find strange cave paintings and evidence of an earlier expedition, then learn they are not alone: Underground predators inhabit the crevasses, and they have a taste for human flesh.

Phantasm II (1988)
Years after surviving his encounter with the sinister Tall Man (Angus Scrimm), Mike Pearson (James LeGros), now a mental patient, still has nightmares about the evil gaunt mortician. Upon being released from the institution, Mike and his friend Reggie (Reggie Bannister) set out to track down the Tall Man and end his murderous and macabre practices. Also involved is Liz Reynolds (Paula Irvine), a pretty young woman who has a psychic connection to both Mike and the Tall Man.
Watch it here.
Night Watch (2004)

Hundreds of years ago there was a battle between the Warriors of Light and the evil Warriors of Darkness. Realizing that they were evenly matched, the two sides agreed to a truce. The fragile peace between good and evil is kept in place by two groups: the Day Watch and the Night Watch, each monitoring the opposing side. Now Night Watch member Anton Gorodetsky (Konstantin Khabensky) finds himself at the center of a prophecy that may mark the end of the delicate balance between the two sides.
Watch it here.
Newer Post Older Post Home