The Dark Knight Vs. The Darker Knight in Batman: The Adventures Continue #8 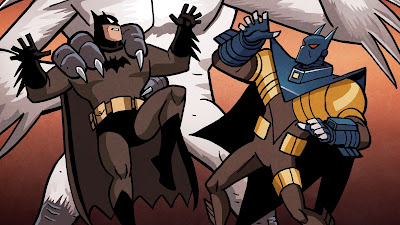 After taking in the first three digital pages of Batman: The Adventures Continue #8, I can tell you things start off heated from the get-go. Alan Burnett and Paul Dini don't mess around and inject enough action into the beginning of this issue than you get in an entire issue of other comics. The artwork perfectly captures the look and style of Batman: The Animated Series. If you're a fan of the show, there's no doubt in my mind you're going to love this.
After nearly killing Penguin, Azrael races to find the person who stole from the Church of St. Dumas. Batman, however, won't allow Azrael to use such aggressive methods. Who will be left standing when the Dark Knight faces the burning vengeance of St. Dumas?!
You can get Batman: The Adventures Continue #8 right here.
Newer Post Older Post Home