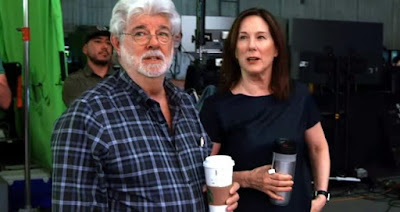 Cosmic Book News reports "that Kathleen Kennedy will be stepping down from Lucasfilm to start her own female-centric production company, which follows the rumor that Disney is resetting 'Star Wars.'" The "reset will involve the erasure of 'The Force Awakens,' 'The Last Jedi,' and 'The Rise of Skywalker' through a concept introduced in the 'Star Wars Rebels' animated series, the 'Veil of The Force.'" Just for the record, I am not okay with this.

Rarely have I ever spoken up against anything Lucasfilm has done when it comes to Star Wars canon, but I am not alright with this at all. For those that don't follow the animated shows, those particular episodes of "Rebels" concern portals people can travel through to change the past. I don't want "Star Trek" in my "Star Wars."

To me, "Star Wars" has always been about the consequences of your actions and the lessons you learn from them. If someone can go back and save Darth Vader or change his fate, then where are the consequences of the lessons learned and taught in the films? This very element is a major point that separates the two "Star" franchises.

Don't get me wrong, I love "Star Trek." However, there's always been a clear distinction between "Wars" and "Trek." I just don't  like the idea of messing with what makes each one uniquely entertaining.

Also, the "source" of these rumors seems to have a deep resentment for Kathleen Kennedy and strong female characters or authority figures. Personally, I welcome more female characters and love the fact that they're given something to do besides get saved by a knight in shining armor. Anyone who has a daughter would identify with that.