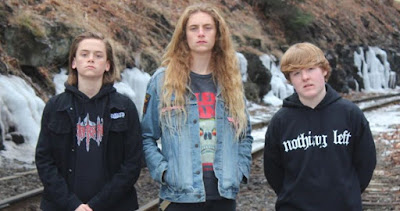 All you have to do is see a picture of Brotality and you know they're a unique band right away. Made up of brothers Bryce and Reece and their friend Liam, the members range in age from 14 to 17 years old. If you listened to their music without knowing this, you'd never be the wiser. The singer sounds like late-1980's DRI and musically you get fiery bolts of that decade's thrash masters and a helping of prog-influenced metal in the vein of Mastodon and Periphery.

I sat down with Brotality to chat with them about their upcoming single that hits streaming outlets on July 3rd and a livestream gig they're playing in celebration that day. Of course, we ended up talking all sorts of geekiness as well. After all, the site is centered on movies, music, and more.

They also shared a bit about their upcoming record being released on Rottweiler Records. We talk how many songs it will be and where are they're recording, too. The boys even delve into their plans for touring in the future and what sort of havoc 2020 rained down upon them in regards to festivals and events they were already supposed to have played at.

For more info on Brotality, go to their Facebook page right here.