New 'Children of the Corn' Movie is a Prequel 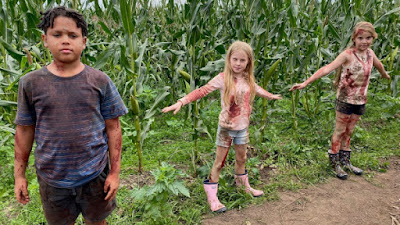 More details have emerged about the upcoming 'Children of the Corn' reboot, revision, re... whatever. Director Kurt Wimmer's latest installment in the long-running franchise has had its cast revealed and a plot synopsis even dropped. We now know the time frame in which the film takes place because of that.

According to Variety, the new 'Children of the Corn' sounds like it's a prequel to the Stephen King short story. Producer Lucas Foster ('Ford v Ferrari') says it has “almost nothing to do with” the original 1984 movie. He shared his take on the upcoming film.

"We went back to the story and free-associated from there,” Foster stated in an interview with Variety.

The new 'Children of the Corn' describes the events leading up to, and including, the massacre of the adults of a small town in Nebraska by their children, after the adults’ irresponsibility ruins the crop and the children’s future. Elena Kampouris ('Before I Fall') and Kate Moyer ('When Hope Calls') star in the movie. Australian actors Callan Mulvey ('Avengers: Endgame') and Bruce Spence ('The Lord of the Rings: The Return of the King') are also a part of the cast.

There's been speculation that the latest entry in the 'Children of the Corn' series will go straight to DVD or digital platforms. However, with big producers involved like Foster ('Man on Fire,' 'Law Abiding Citizen'), Doug Barry ('FML') and John Baldecchi ('Happy Death Day,' 'Conan the Barbarian'), I would think the aim is a theatrical reboot of the franchise. As a fan of even the worst of the sequels, I'm all in to see what we get next.