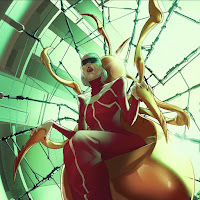 Director S.J. Clarkson (The Defenders, Jessica Jones) is taking the helm on Madame Web. Sony's Spider-Man spinoff is looking at possible A-list actors like Charlize Theron and Amy Adams to take on the lead role. The character is depicted in comics "as an elderly woman with the neuromuscular disease myasthenia gravis, requiring her to be connected to a life support system that look[s] like a spider web."