I have to be honest from the get-go. I do love Star Wars: The Clone Wars on a whole.

That being said, I've been underwhelmed by the first few episodes of season seven.

I want the final season of Star Wars: The Clone Wars to be awesome and end on a high note. Ever since the first episode with Ahsoka disappointed me by being more of a one-off episode instead of being tied to the bigger picture, I've lost momentum with the show and still need to catch up with the past couple of episodes. I sincerely WANT it to get better as a fan of both the character of Ahsoka and series head Dave Filoni.

The final trailer for the last few episodes promises us Darth Maul (as voiced by the awesome Sam Witwer) and some incredible action sequences. The animation and cinematography for Star Wars: The Clone Wars continues to be absolutely jaw-dropping. The camera movement is just spectacular for an animated show and is treated like a feature film in my opinion. I must say that this trailer gets me more excited to see where the series is heading. 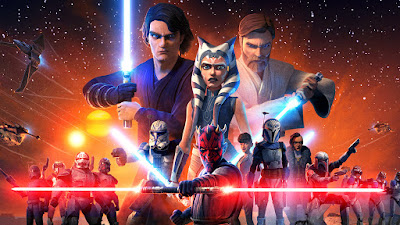 Witness the end of the groundbreaking series. The final season of Star Wars: The Clone Wars continues the storylines introduced in the original series, exploring the events leading up to Star Wars: Revenge of the Sith.