Robert Downey Jr. Evades a Boat with the Help of Animals in Dolittle Clip - Available at Home Now [VIDEO] 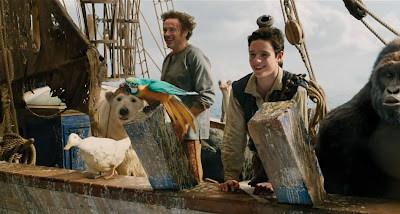 This clip from the movie doesn't really make me more or less excited to see it. The animal's voices are more awkward and out-of-place than Robert Downey Jr.'s accent to me. However, I am trapped in the house with my kids and have nothing but time on my hands thanks to my quarantine lockdown. Check out the video clip below and see if you think you have what it takes to get through the entire film.

Dr. John Dolittle lives in solitude behind the high walls of his lush manor in 19th-century England. His only companionship comes from an array of exotic animals that he speaks to on a daily basis. But when young Queen Victoria becomes gravely ill, the eccentric doctor and his furry friends embark on an epic adventure to a mythical island to find the cure.