Boy was Sonic the Hedgehog not meant for me. However, having seen this movie with the audience it was meant for truly elevated my film experience as one I haven’t experienced in years!

Don’t get me wrong - Sonic the Hedgehog is not a good film, but it isn’t a bad one either. This film was clearly meant for kids ages 8 to 12 and the parents who had to sit through it, as well. Any day, this could had been a bad thing. That being said, I was blessed to have experienced this cinematic blunder with the right audience.

I was fortunate to have sat in the middle of the theater, with kids talking about the lore of Sonic to my left and a single mom to my right laughing at all the bad corny jokes the adults in the film made… giving me the best worst experience I’ve ever enjoyed in my life. To clearly explain this film, allow me to use a stoplight as a fitting example to dive into the world of SEGA’s Cinematic Universe! 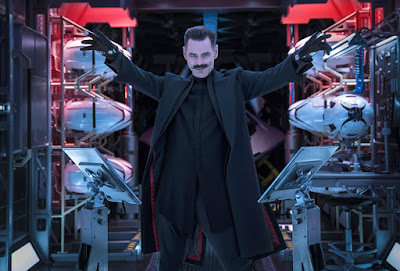 Let’s begin with the RED LIGHT, or the moments where the film comes to a STOP. Again, Sonic the Hedgehog is meant for kids. Sadly, that means the adults in the film are just boring cardboard cutouts. They would spend time making jokes that don’t land because they themselves would normally not talk like that in the real world.

Although the jokes weren’t funny, they were mostly geared for the parents in the room and not the kids. Many of the jokes were Olive Garden related, causing the mom to my right to genuinely laugh no matter what for some reason. This, in turn, would make me laugh, too.

But before the light can turn red, it's first a YELLOW LIGHT. This best describes Sonic himself. A yellow light can go both ways, you can either run or slow down. Sonic himself can provide lots of energy and fun when he’s alone with the audience, reminding us of the rush we had as kids and often feel as adults when we drive faster to avoid a stop light.

Sonic does make A LOT of 90's references that often go above the kids' heads, but sticks the landing with all the new meme and Fortnite references kids today have come to know. I was as oblivious to those jokes as the Olive Garden mom to my right. Still, the kids to my left were quick to point out the references and Easter eggs only a kid their age would know.

For me, Sonic the Hedgehog is best seen as that yellow light that never overstayed its welcome. Although many parents found the character to be harmless fun for kids to laugh at, I found it a warm reminder of the countless movies my parents took me to see that they themselves didn’t understand the appeal of. Having those kids enjoy the film to my left truly elevated the experience and reinforced the fact that Sonic is a good family movie whose target audience will not be disappointed.

But now let’s get to the GREEN LIGHT - the return of Jim Carrey on film and IN LIVING COLOR! To say Jim Carrey was good would be an understatement. His return on screen as Dr. Robotnik / EGGMAN is what Joe Pesci’s character was to The Irishman. Carrey is uncaged, giving a performance that has been dormant for decades! The moment the actor came onscreen, I realized I was watching this film’s version of Heath Ledger’s Joker.

It's a performance no one expected to see and, quite frankly, probably weren’t ready for. Jim Carrey is truly a man of many talents, with call backs to his early days as Ace Ventura and The Mask. He oozes out a non-stop adrenaline that surpasses that of Sonic’s. I was blown away as he chewed the scenery and elevated the film to one that I must recommend if you’re in the mood for a classic but fresh, Jim Carrey movie.

Sonic the Hedgehog banks on 90's nostalgia that often fails. However, Jim Carrey brings us back to that energy he displayed in that decade and reminds us of the fun times we all had with him as he entertained us over the years! This movie is not the best. The product placement worked, because it made me crave Olive Garden as they kept running that joke through the entire film.

Still, I found myself having a wonderful time realizing Sonic the Hedgehog was never meant for me. It’s a bittersweet realization that we all grow up over time, taking with us childhood memories that new kids are in the early stages of making right now. Jim Carrey’s return amplifies this with his energized charisma, reminding us to always have that childlike wonder as we slow down with age.