Behind every great event, movie, or song is a great promoter and organizer keeping the threads of entertainment together.

Jairus Pascale of Mythic Panda Productions is one of those fine folks behind the Hasten Revelation Tour, which kicks off on Saturday, March 7th at the Railyard in Fort Worth, TX. I spoke with Pascale about what makes him tick and his behind-the-scenes involvement with one of the most brutal metal tours to hit the road this year. Check out the interview after the jump.

Give us a little introduction to yourself.

Hey folks! my name is Jairus Pascale and I’m the owner of Mythic Panda Productions. Some may know that, alongside Jake Martín of Taking the Head Of Goliath, I’m also the co-owner and executive director of The Hasten Revelation Tour. With Mythic Panda Productions, we are a full audio/video studio here in North Texas that focuses on music and film production on a myriad of levels, from feature films, commercials, music videos, and so on.

Do movies and television affect your work and life?

Oh yes, they do! On a more humorous note, the rest of the Mythic Panda folks, like me, are huge Star Trek fans. Hearing Kirk, Picard, Worf, Dax, and Riker quotes around the office is very much a thing. Parks and Rec, The Office, and Disney films all have their moments that get adapted into our work community as well. We’re pretty eclectic!

Hands down, my favorite actor is Nicolas Cage. He’s one of Hollywood’s most courageous actors. His take on character development and scene anatomy is brilliant. The way he adapts to even the worst of scripts and laziest of directors, leaves me especially enjoying his work - even the critically panned work.

Great question. Yes, in a manner of speaking, a couple so far. A few years ago, Extol released their “Of Light and Shade” documentary and I was the executive producer on that project. There’s also a feature film (currently in distribution talks) called The Last Champion starring Cole Hauser that I was an executive producer on and that I have an acting cameo in as a HS wrestling referee. When I was in college, I was in a few student films for reasons such as looking scary, making death metal voices, stunt / fight work, etc. So yeah, I’ve dabbled here and there. I even was on a “reality” show on Home & Garden network called “Ground Rules.”

Here at Mythic Panda, when we go into making a music video we always start with talking with the band and try to see through their eyes what the song is saying. Once that happens, we create a script (as big or as small as one can think up) and piece together what need be told and chip away until it’s perfect for that band. Some bands want a very simple video - guys playing in a field - while others want a story / actors, multiple looks and locations, etc. We work really hard to create a piece of art and or story for the band that matches the vibe and vision of that release. What we want to communicate is more of a hand-in-hand dialogue with the music as a type of film score to a visual story. The details of what we’re trying to say, that all depends on the song! :) 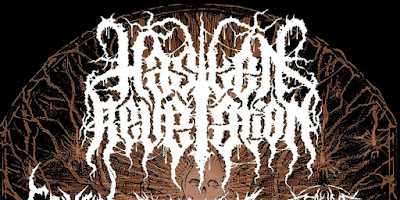 We worked with a one-man project out of Atlanta called Body Pile. He came in and busted out 3 songs of grind/noise/post-metal (to get genre picky) and it was brutal.

In the last couple years, Mythic Panda has stepped into the music promotions game and started to put shows together. With a list of bands like A Hill to Die Upon, Galactic Cowboys, Halcyon Way, Taking the Head Of Goliath, and others, we are honored to bring them to the stage!

You're helping with the Hasten Revelation Tour very soon. Tell us a little bit about the tour and what it means to you?

The Hasten Revelation Tour is the creation of Jake Martín and myself. While we are co-owners, my roles are executive director and branding / development. Jake is the tour manager and booking manager. Our goal is quite simple: we want to establish an extreme metal tour for the heaviest of Christian Metal bands. The future touring structure may look different every year, yet the goal is always the same: to bring the name of Jesus and His life changing message of Grace and Forgiveness to unbelieving people via a medium that is very misunderstood by the mainstream church.

For me, one of the most meaningful aspects of Hasten Revelation is the community we are blessed to have because of it. We may not all agree on bands, production styles, or sub-genres, but Hasten is growing bigger than just a FB following. Jake and I have seen a small taste of what Hasten could be, and we are brainstorming for the future growth and expansion of this new, exciting brand!

This year, the 2020 Hasten Revelation Tour is STACKED with brutal bands. Starting with Mythic Metal Fest on March 7th here in Ft Worth, Tx, Hasten is producing one of the years most brutal lineups. From the young slammers in Cardiac Rupture to the METAL MASTERS Crimson Thorn, we’re covering a lot of years of extreme metal all in one tour! We also have the LEGENDARY Living Sacrifice headlining the opening show on March 7th. We have death metal, deathcore, slam, grind, and other extreme acts joining us for the week of March 7th-March 14th. Lastly, to all our Hasten fans not on the path of the 2020 tour, while we are thrilled to bring this tour across the west, who knows, maybe next year the tour will be closer to you! Hope to see you on tour!

Be sure to catch Mythic Panda's latest endeavour, The Hasten Revelation Tour, starting in Dallas / Fort Worth, TX on March 7th at the Railyard. Crimson Thorn, Taking the Head of Goliath, Abated Mass of Flesh, Cardiac Rupture, and My Place Was Taken will be joined onstage by Living Sacrifice, Benevolence, Death Requisite, and The Weeping Gate. Ticket info can be found here.