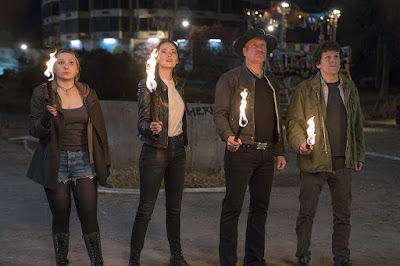 While not as good as the original, the obscene and irreverent Zombieland: Double Tap is quite an entertaining watch.

Of course it doesn't feel quite as fresh as the first movie - it's a sequel and you really can only do so much with the living dead genre. Let's be honest, between George A. Romero, John A. Russo, and Robert Kirkman, there's not much left to say.

What works is a cast that seems to legitimately want to be back in these roles. What doesn't work is the CGI-enhanced blood splatter that makes every headshot and brain-bashing look like a parody of itself. I have to say, I was rather impressed how the zombies are "taken care of" in the end as well. Straight zombie fans will no doubt find something to like here, while gore-hounds might be disappointed in the gimmicky blood splatters. 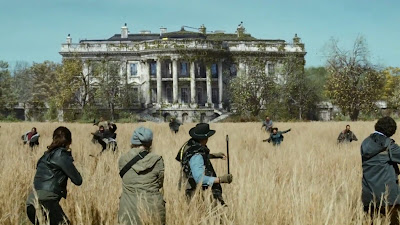 Zombie slayers Tallahassee, Columbus, Wichita and Little Rock leave the confines of the White House to travel to Graceland in Memphis, Tenn. Along the way, they encounter other post-apocalyptic warriors and a group of survivors who find refuge in a commune. The scrappy fighters must now rely on their wits and weapons more than ever as they soon find themselves in a relentless battle against smarter, faster and seemingly indestructible zombies.

Zombieland: Double Tap is rated R for good reason. It contains bloody violence, language throughout, and some drug and sexual content. The characters do enjoy their pot. Tons of F-bombs are dropped and there are definitely sexual references all over.