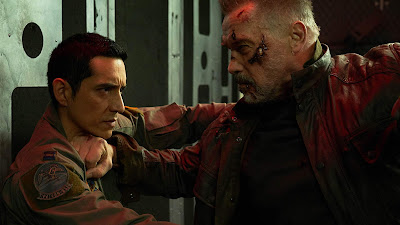 The return of Linda Hamilton as Sarah Connor was enough to get me excited to see Terminator: Dark Fate. I wasn't disappointed by her or Arnold Schwarzenegger's performances, or any of the other cast who delivered great performances. It does feel like Terminator: Dark Fate is a bit rushed from the get-go, and I still haven't made a decision whether that was a bad or good thing.

The CGI looks great and the action sequences are ridiculously entertaining, and when going into a movie like this that's what counts. My one complaint about Terminator: Dark Fate is that it's villain - the Rev-9 - is a sort of two-trick pony. He can split into two parts and he can make swords protrude from his body. The tricks are both cool, but I expected more.

The music score for Terminator: Dark Fate helped accentuate the action and call back to the first two films in the franchise. However, it didn't quite make an impression on me when it strayed from those classic motifs.

All-in-all, Terminator: Dark Fate is an action-packed thrill ride that definitely does a great job following up both The Terminator and Terminator 2: Judgment Day. I enjoyed where the writers took the story and found it engaging. The message that people decide their own fate and make their own choices is a great one. We also get the message that, no matter what, humanity is destined to destroy itself without a higher power intervening for us and through us. 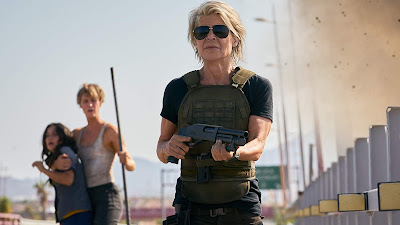 Terminator: Dark Fate is rated R for good reason. There are a lot of f-bombs dropped throughout the movie. We also get quite a bit of violence and gore, as you would and should expect from this classic action / sci-fi series.

In Mexico City, a newly modified liquid Terminator -- the Rev-9 model -- arrives from the future to kill a young factory worker named Dani Ramos. Also sent back in time is Grace, a hybrid cyborg human who must protect Ramos from the seemingly indestructible robotic assassin. But the two women soon find some much-needed help from a pair of unexpected allies -- seasoned warrior Sarah Connor and the T-800 Terminator.