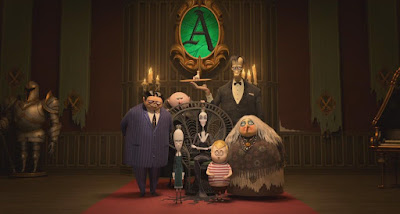 As a big fan of The Addams Family, I was really hoping for more from this new incarnation of the first family in macabre humor.

The voice cast really isn't the problem and neither is the animation. It just isn't as good as it should have been in the story department. There's really nothing new here. Another problem I had with it is that some of the adult humor really is a bit much, even if it goes over the heads of the youngsters. While I welcome a new take on the Addamses, I think I'll stick with the original and the 1990's version of the bunch. That being said, there's enough here to merit seeing it to pass some time.

I do give the film props for trying to teach a lesson to adults and children alike. However, it does recycle a plot we've all seen before to get across the message. Basically, The Addams Family is a lesson in tolerance and accepting those who might be different around you. I think we can all still benefit from that social commentary. 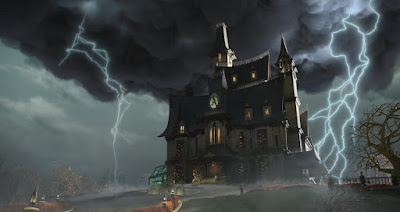 Members of the mysterious and spooky Addams family -- Gomez, Morticia, Pugsley, Wednesday, Uncle Fester and Grandma -- are readily preparing for a visit from their even creepier relatives. But trouble soon arises when shady TV personality Margaux Needler realizes that the Addams' eerie hilltop mansion is standing in the way of her dream to sell all the houses in the neighborhood.