I've seen Star Wars: The Rise of Skywalker a couple of times now and feel a little more at ease adding to my initial review of the film. J.J. Abrams did a wonderful job bring a 9-film saga to its conclusion. I still can't think of any other way it could have ended.

Star Wars: The Rise of Skywalker really did answer most of the questions fans had about the last two movies in this trilogy. That's not to say everyone liked what Abrams and co-writer Chris Terrio gave them. Many of us had our own ideas of how things should wrap up and they didn't match up with what we saw onscreen. I, for one, try to steer clear of having any hard expectations going into the theater and was pleased when walking out both times I saw it.

I did have a couple of issues with Star Wars: The Rise of Skywalker, but nothing that ruined the experience for me on a whole. I really do feel as if Rose was sidelined and there could have been a way to have her tag along for the big mission or maybe just give her Dominic Monaghan's scenes and dialogue. 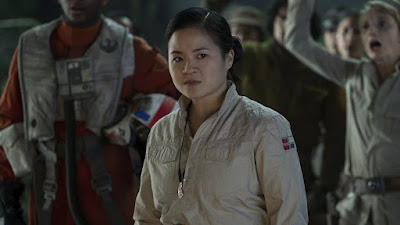 My last big complaint is more about the sequel trilogy as a whole. I think as time goes on, J.J. and the rest of the Lucasfilm crew are going to regret not putting Luke, Han, and Leia all together at one time for an onscreen reunion. It was great that they were all included with Lando added in Star Wars: The Rise of Skywalker, but having them all together at once really is a missed opportunity that I wish we could have witnessed.

The death of Ben Solo / Kylo Ren in Star Wars: The Rise of Skywalker really was a necessary component to the story, even though many Reylo fans are up in arms about it. The character had to be punished for his sins somehow. I think J.J. an Terrio found the perfect way to give everyone, including the character, what they needed. What was going to happen? The Resistance wasn't going to just slap him in the wrist and let Rey and him get married, have kids, and live happily ever after on Tatooine. At least he found love and redemption before he became one with the Force.

Honestly, there's so much more I could say about Star Wars: The Rise of Skywalker. I could sit here and write about the movie for days. Hopefully, everyone can find something positive to take away from the film. Regardless of whether it was your favorite or least favorite entry in the saga. After all, isn't Star Wars supposed to be about having a good time and escaping reality for a couple of hours?