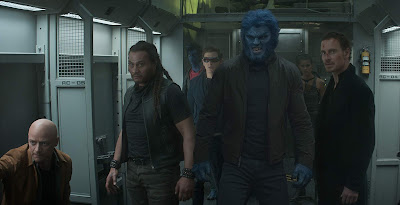 It's no secret that the X-Men franchise has been in an uneven talespin since the release of X-Men 3: The Last Stand. Personally, I haven't been a big fan of the series from the beginning, with the exception of First Class. Each entry in the franchise really has been a product of its director and creative team. The proof is in the end result of what we received in the theater. Matthew Vaughn (Kick-Ass, Kingsman films) helmed First Class and James Mangold (3:10 to Yuma, Ford v. Ferrari) held the reins to both The Wolverine and Logan. I think enough has been said. X-Men: Dark Phoenix isn't the best movie in the series, but it's at least entertaining, short, and to the point.

The X-Men face their most formidable and powerful foe when one of their own, Jean Grey, starts to spiral out of control. During a rescue mission in outer space, Jean is nearly killed when she's hit by a mysterious cosmic force. Once she returns home, this force not only makes her infinitely more powerful, but far more unstable. The X-Men must now band together to save her soul and battle aliens that want to use Grey's new abilities to rule the galaxy.

I've always found the Bryan Singer X-Men films in the series to be way too long and convoluted. I know many disagree with me, but my opinion is my opinion. Dark Phoenix wastes no time getting straight to the heart of the action and story. A dangerous alien takes over Jean Grey. Other aliens come to Earth that want the power to take over the planet. The X-Men have to stop it while dealing with the personal and emotional repercussions the crisis has had on the mutants, both good and bad. That's it. It's that simple.

The acting in X-Men: Dark Phoenix was up to par with the other films. James Mcavoy, Michael Fassbender, Sophie Turner, and the rest of the cast all fulfill their duties in this last installment of the Fox universe of these Marvel superheroes. Turner does a commendable job of showing different ranges of emotion as she struggles between her humanity and alien possession.

There are some great action sequences in Dark Phoenix as well. Helicopters crash and large pieces of metal are flung at different characters. An awesome battle on a speeding train serves as the climax of the film. Let's not forget about some awesome scenes with Quicksilver and Nightcrawler buzzing around at breakneck speeds.

The only weak spot I really noticed was the CGI in some spots. There are a couple scenes where it literally looks like the effects team was just told to stop in the middle of the process. Were they working on that exact part when they were told Disney bought Fox? One digital depiction of a certain character looked as bad as the Scorpion King did in 2001's The Mummy Returns.

I was also glad that X-Men: Dark Phoenix actually concludes. There's no tease for another movie we're never going to get now. The Fox buyout happened before this movie came out, but they still could've made a bad decision and left us with an open ending. Things aren't perfect at the close of the film, but we're assured that everyone will go on and continue fighting evil.

X-Men: Dark Phoenix was directed by Simon Kinberg. It stars James Mcavoy, Michael Fassbender, Jennifer Lawrence, and Sophie Turner. It is rated PG-13 for intense sequences of sci-fi violence and action including some gunplay, disturbing images, and brief strong language.