I know I'm a bit late to the party, but I wanted to share my thoughts on Spider-Man: Far From Home. While the movie ends up being fun visually and successfully humorous, I still have a hard time connecting to the main character. Spider-Man is so incapable of doing anything on his own and screws up everything. I find it hard to believe that ANY responsible person would leave him in charge of saving a gas station, let alone a city or world. I understand that he's a kid, but why would Tony Stark or Nick Fury trust him to get anything done correctly?

Peter Parker's relaxing European vacation takes an unexpected turn when Nick Fury shows up in his hotel room to recruit him for a mission. The world is in danger as four massive elemental creatures -- each representing Earth, air, water and fire -- emerge from a hole torn in the universe. Parker soon finds himself donning the Spider-Man suit to help Fury and fellow superhero Mysterio stop the evil entities from wreaking havoc across the continent.

The CGI is what we've come to expect from the Marvel films. The soundtrack carries the scenes, but doesn't really leave any impact on the viewer. I can't remember a single motif from the score; only the rock songs used, like The Go-Go's "Vacation." 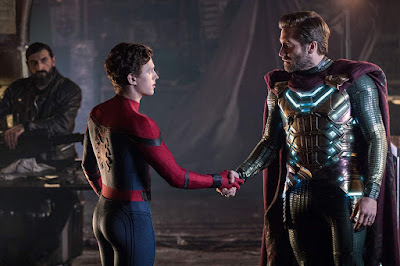 Jake Gyllenhaal was great at Mysterio. He was perfectly over-the-top when need be and sincere at the right times. His diabolical plan and his what it took to achieve it was a little hard to believe. You really had to just give into it and move on.

All the high school antics and scenes with Happy Hogan were delightful. The actors who played the high schoolers captured the spirit of their characters wonderfully. I've finally had to come to terms that it's not Tom Holland I don't like, it's the Peter Parker he's playing. At some point, I'd like to see him as a matured more sensible Spider-Man.

Spider-Man: Far From Home is rated PG-13 for sci-fi action violence, some language and brief suggestive comments. The high schoolers talk the way you would expect them to in movies and Peter gets caught in a compromising position at one point. Most of the violence is just like any of the other Marvel movies - monsters and villains attacking people and our superheroes fighting against them.