First Stargirl Trailer Gives Us a Glimpse at Justice Society 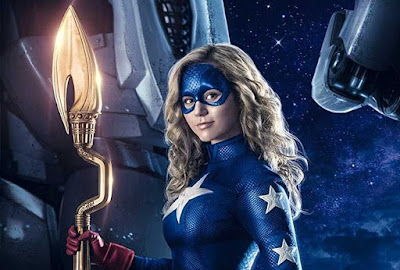 The latest trailer for Season One of The CW's newest DC adaptation, Stargirl, has hit the internet. Is it wrong that the lead character wasn't even the most exciting part of the teaser for me? I was much more excited to see the very brief glimpses at the Justice Society and Luke Wilson as Pat Dugan. Check out the trailer after the jump.

Comic book nerds know Pat Dugan as Stripesy, the sidekick to teen superhero The Star-Spangled Kid and stepfather of Stargirl. We even get a look at S.T.R.I.P.E., a powered armor suit Dugan invented and wore while fighting crime.

The show looks like it will appeal to average teens because of the high school setting and characters. Adults and come book fans will get hooked because of its connections and appearances to superheroes like Starman and the Justice Society. Honestly, if they get enough adolescent drama and angst involved, the show could find an audience in viewers of One Tree Hill fodder and the Arrowverse crowd.

Courtney Whitmore (aka Stargirl) is smart, athletic and above all else kind. This high school teenager’s seemingly perfect life hits a major speed bump when her mother gets married and her new family moves from Los Angeles, California, to Blue Valley, Nebraska. Struggling to adapt to a new school, make new friends and deal with a new step-family, Courtney discovers her step-father has a secret; he used to be the sidekick to a superhero. ‘Borrowing’ the long-lost hero’s cosmic staff, Courtney becomes the unlikely inspiration for an entirely new generation of superheroes.