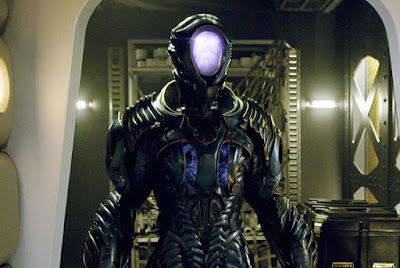 Lost in Space was a pleasant surprise for my family when it premiered on Netflix. Most sci-fi shows these days aren't family-friendly and target a mature audience, leaving a giant hole in the realm of child-safe genre television everyone can watch together. Although Lost in Space is dark and even gritty, there's really nothing in the way of heavy profanity or adult situations to keep me from letting my 13-year-old enjoy it. The second season premieres on December 24th and looks to push the boundaries of action and suspense even further. It appears a few horror tropes will be thrown at us as well. Check out the trailer for the second season after the jump.

The Robinsons are back... but have you seen their Robot?

There's more danger — and adventure — ahead for the Robinson family! With the Jupiter 2 stranded on a mysterious ocean planet without their beloved Robot, the Robinsons must work together, alongside the mischievous and manipulative Dr. Smith and the always charming Don West, to make it back to the Resolute and reunite with the other colonists. But they quickly find all is not as it seems. A series of incredible new threats and unexpected discoveries emerge as they look for the key to finding Robot and safe passage to Alpha Centauri. They will stop at nothing to keep their family safe ... survival is a Robinson specialty after all.

Lost in Space Season 2 returns December 24th, only on Netflix.