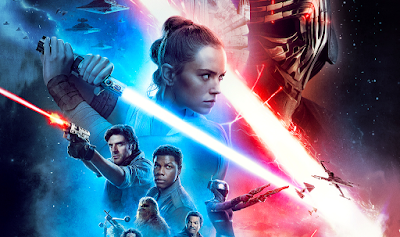 So it's been a couple of days since I saw Star Wars: The Rise of Skywalker. The movie sits at 59% on Rotten Tomatoes. Am I surprised? Not one bit. Who would have thought that the last chapter in a saga that began when I was 5 years old and spans four generations of fans would be divisive?

The surviving Resistance faces the First Order once more as Rey, Finn and Poe Dameron's journey continues. With the power and knowledge of generations behind them, the final battle commences.

Star Wars: The Rise of Skywalker is way too much movie to take in in just one viewing. I'm doing this first reaction review before the film hits theaters tonight. However, I'm seeing it again on Saturday and will expand my review after that.

If Disney and Lucasfilm didn't hold to their own self-imposed three movie / trilogy rule, The Star Wars: Rise of Skywalker would and should be at least two movies. It's stuffed so full of story and action, there's barely any time to stop and take a breath.

J.J. Abrams and Chris Terrio really have delivered a satisfying conclusion to the Skywalker saga. Does Star Wars: The Rise of Skywalker feel rushed and messy at times? Of course it does! How could it not, with all the unanswered questions The Force Awakens and The Last Jedi left them to address and character arcs that needed to be completed?

Did Abrams and Terrio use a list of tick boxes to check off as they addressed each item they had to wrap up in Star Wars: The Rise of Skywalker? Most likely. How else could they keep up with every little thing fans of the franchise were going to want to experience and get closure for? However, I didn't feel like that's all they were doing and it didn't feel convoluted. It's perfectly predictable and unpredictable in all the right ways exactly when it needs to be.

Some are wondering what the tone of Star Wars: The Rise of Skywalker is and how it fits into the grand scheme of this sequel trilogy. I would say it sits perfectly balanced between The Force Awakens and The Last Jedi. When the Emperor is around, things are pretty dark and oppressive.

Star Wars: The Rise of Skywalker was going to be divisive no matter how it turned out. J.J. Abrams and Chris Terrio had a thankless job of concluding a four decades old story that people of all ages and expectations were going to experience in their own personal ways. I can't think of any other way they could have brought the saga to a close. Like Darth Vader said, "The circle is now complete."