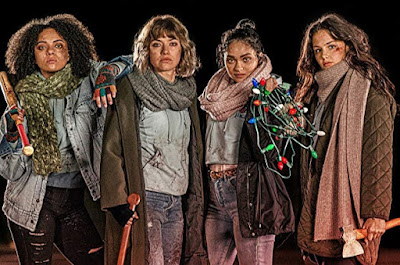 When you see the trailer for Black Christmas, most folks will no doubt find it to look like your typical teen slasher film. Another entry into the holiday slasher-themed sub genre that's gained so much attention in the past decade. You wouldn't be wrong in assuming this, with scene after scene of a masked killer stabbing away at his or her female victims. However, Director Sophia Takal says there is so much more to the film than just a terrifyingly good time. There's a message she wanted to spread. "You can never let your guard down, you always have to keep fighting. And that was what we wanted to make a movie about. Some of the men that people have called out during the #MeToo movement were reintegrating into the world without having to totally reckon with what they’ve done." After the jump, you can check out the trailer for the latest version of the classic horror movie.

I have a hard time calling this new iteration of Black Christmas or the 2006 version a remake because each one sort of stood on its own. They might have the same premise, but the stories and details are different. I think of each film as part of a franchise re-visited every few years. Honestly, they could almost be considered sequels. It's not like any of them are actually tied to each other directly.

Hawthorne College is quieting down for the holidays. One by one, sorority girls on campus are being killed by a stalker. But the killer is about to discover that this generation's women aren't willing to become hapless victims as they fight back.

Black Christmas arrives in theaters on Friday the 13th.