Musicians on Movies: Steve Reishus from Taking the Head of Goliath and Crimson Thorn 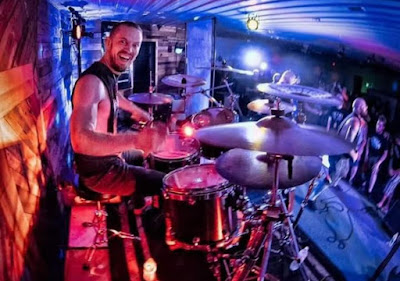 In the Christian death metal scene, two bands stand out above the rest. Drummer Steve Reishus happens to play drums for both of them. Taking the Head of Goliath is a newer band that follows in the footsteps of groups like Cannibal Corpse, Malevolent Creation, and other classic groups. Crimson Thorn is one of the bigger names when it comes to Christian extreme metal, sharing the spotlight in the 1990s and 2000s with their peers Living Sacrifice, Mortification, Vengeance Rising, and many others. I took the opportunity to talk with Reishus about his connections with movies and music and how they fit into his life. You can check out the interview after the jump.

My name is Steve Reishus. I play drums for Taking the Head of Goliath and Crimson Thorn.

As far as movies, I tend to like a lot of action movies - classics like Heat, Reservoir Dogs, Falling Down, The Game, Boondocks Saints, etc. I'm also an early Star Wars fan; not so much the newer ones, but I'll still watch them. I used to really like comedies, but it's been years since I've seen one that wasn't like watching a steaming pile of garbage. It seems like instead of being creative, they just try to outdo each other in disgusting humor.

I really don't watch TV at all, so I don't have much for you there. Even the movies I listed are fairly dated, which tells you a little about how much I watch movies these days. The closest thing to TV for me is the occasional UFC fight or bare knuckle boxing. I was a martial arts guy for a number of years, so I love combat sports. I'll watch that if I run across it.

My viewing habits have changed a lot with my faith in Christ. When I became serious about following Jesus, I saw a big change in what I felt okay watching, and so that's part of the reason I don't watch as much now. A lot of those old favorites I really wouldn't watch now because they don't really speak to me where I'm at in life. It's not that I'm trying to be all goody goody, it's that I have a peace and a joy that comes through the proximity of my heart to Jesus. I see that get jostled at times when I'm careless about what I expose myself too. A couple films I've really enjoyed lately have been documentaries by Darren Wilson. He's got some faith based documentaries that I have found super enjoyable (Finger of God, Father of Lights, Furious Love).

Well, being I don't write lyrics, not really.

I can't say I have a favorite.

Right now, Taking the Head of Goliath have a new single that we just released entitled Chord of Three Strands. You can find the lyric video on YouTube. We are also in the middle of recording a new album that will be called Futility of the Flesh, with a hopeful release date in 2020. Both the bands I play for will be touring this upcoming March with the Hasten Revelation tour. That's gonna be a fun one. It'll be Cardiac Rupture, Abated Mass of Flesh, Taking the Head of Goliath, Broken Flesh, Crimson Thorn, and some other special guests along the way. It's a whole lot of death metal on one ticket!