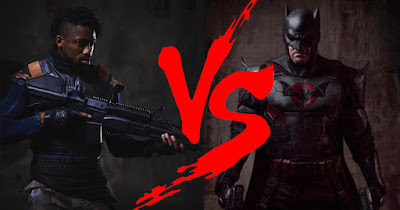 There is a new episode of Super Hero Beat Down on YouTube and it is awesome. The diligent folks over at Bat in the Sun have brought us Marquette King as a resurrected (MCU version of) Killmonger in his Golden Black Panther costume, facing off against Kevin Porter’s Flashpoint Batman. For those who may not know, years ago there was an event in DC comics called Flashpoint. The premise was that Barry Allen (AKA the Flash), uses his powers to go back in time and save his mother from being mysteriously murdered. The effect of his time travel caused broader changes in the timeline, one of them being that Bruce Wayne is killed by Joe Chill on that infamous night, not Thomas and Martha. Long story short, Thomas Wayne becomes Batman, but a far more brutal, gun-wielding, Batman than we are familiar with. And in episode 25 of SHBD we get to see what would happen if these two came to blows! Click the link to watch the film and enjoy!