Star Wars Adventures: Return to Vader's Castle Reminds Us Halloween is Just Around the Corner 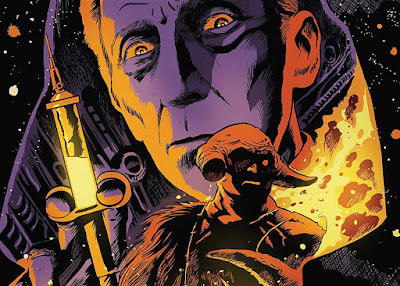 A couple of issues of Star Wars Adventures: Return to Vader's Castle have come out recently via IDW Publishing and the previews of the issues definitely should catch the eyes of younger and fans of a galaxy far, far away who also enjoy the horror genre. I've given both #1 and #2 a look and think I've got the formula down for each issue. They feature a few creepy and freaky tales told by Darth Vader's servant, Vanee.

Vader's "butler" tortures an individual both physically and mentally through short stories based on all our favorite characters from George Lucas's blockbuster franchise. They had me sold on issue #2 for sure as soon as I saw the image of Grand Moff Tarkin. His face is shown and he is holding an injection of some sinister-looking green serum. It very much reminded me of the way we've seen actor Peter Cushing look in old photos from Curse of Frankenstein and other Hammer horror classics.

Vanee very much fits the persona of the cloaked Cryptkeeper from Tales from the Crypt and Vaultkeeper from The Vault of Horror comics published by EC Comics. Star Wars Adventures: Return to Vader's Castle will appeal to older fans because of this element and the anthology formula of the series. Younger kids will just enjoy the scary stories, which will no doubt come across as a Star Wars version of Goosebumps or other youth-oriented literature of the nature. 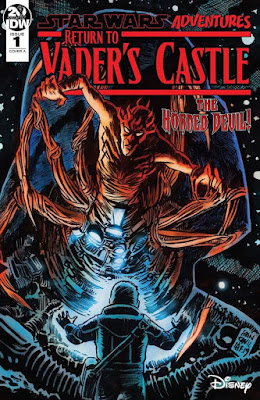 I would suggest any Star Wars or horror enthusiasts give this family-friendly title a try. Star Wars Adventures: Return to Vader's Castle is especially timely with Halloween season upon us. Grab a couple of issues from your local comic shop, curl up on a rainy night with the kids, and have a frightfully good time.

Return to Vader’s Castle for a spooky spin on your favorite villains from a galaxy far, far away… This exciting weekly series explores the hidden corners of the Star Wars Galaxy and features a wretched hive of scum and villainy including Darth Maul, Grand Moff Tarkin, Asajj Ventress, Jabba the Hutt—all under the shadow of Darth Vader! Fans will be excited to discover these creepy stories by fan-favorite writer Cavan Scott, with art by the greatest talent from across the galaxy, including Nicoletta Baldari, Nick Brokenshire, Francesco Francavilla, Kelley Jones, Megan Levens, and Charles Paul Wilson III!