Let me start by saying that I enjoyed this film. It is a lot of fun and well scripted, while maintaining a somewhat serious tone. While it does help to have seen the first two Terminator films, it really isn’t needed to enjoy Dark Fate. They do a great job of filling in those who may have been too young to watch Cameron’s original films but do have enough Easter Egg material that true fans will appreciate the effort. I will include some spoiler material after the jump so I’ll just say this for now: It isn’t as good as the original Terminator films and it isn’t as dark, but that doesn’t make it bad. It is very enjoyable and creates a new pathway forward for the franchise should they choose to continue making them. In many ways Dark Fate is the Star Trek: Generations of the Terminator franchise, a decent and enjoyable film that hands the baton to a new group of characters with new problems. For more, I’ll see you after the jump.

If you haven’t seen anything beyond the commercials there will be a few surprises when you watch the film so I’m going to try to avoid anything you wouldn’t have guessed from the trailers. Dark Fate opens with material from T2 and then quickly tells you that this isn’t the story your used to; new stakes, new enemies, and new resistance heroes which is one of the biggest twists in the franchise. For the first time the time-traveling resistance bodyguard is a legitimate threat to the Terminator due to her cybernetic enhancements. In their first encounter Mackenzie Davis’s Grace goes toe-to-toe with Gabriel Luna’s Rev-9 Terminator and gives him a beat-down that would have given Arnie’s Model 101 a reason to reconsider his profession. But it’s here that Luna’s Rev-9 demonstrates how and why he’s the most dangerous Terminator to ever be seen on-screen. 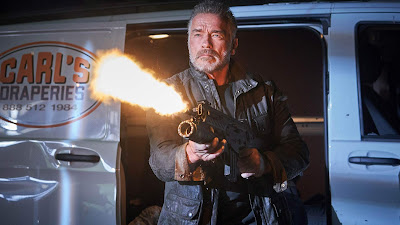 Thus far we’ve seen endoskeleton terminators, liquid metal terminators, and one that blended the two, but we’ve never seen one that could separate and become two. The Rev-9 has an endoskeleton half and liquid metal half that are terrifyingly effective combined but can split doubling the threat they present. Moreover all of the terminators we’ve seen thus far have been relatively slow, but the Rev-9 is freaking Jet Lee and a master hacker. Undoubtedly, he is the most frightening of the future machines thus far, but more frightening is why he exists at all. Linda Hamilton’s Sara Connor arrives to save Grace and damsel in distress Daniella "Dani" Ramos just in time to give us a reason for exposition and a destination.

The highlight of the film is the interaction between Schwarzenegger and Hamilton which is both tragic and humorous at times but really the heart of this story. As I mentioned in the beginning, this movie is a handing of the baton to the new crew so much of the third act is getting a chance to say good bye to our familiar Cyberdyne Systems Model 101 and the world he comes from. Dark Fate is an excellent completion of the Cameron trilogy and introduction to a new series of films that be much more than what we’re used to. In many ways this movie does allow the story to grow and evolve in ways it couldn’t in the past.

While I like it, Dark Fate does have some problems, but the biggest one is the fact that they had too much money. The action felt more in line with a big-budget super hero film than a Terminator film which was one of the problems Genisys had. Just because you can do a thing doesn’t mean that you should do a thing. So while it isn’t as good as it could be, Dark Fate is a good movie and should be enjoyed… at least on your big screen if not in the theatre.