IT Chapter Two is the sort of movie that sounded good on the page, but just doesn't translate to the screen well. As a narrative film, it starts to derail when the Losers Club split up. Some of the experiences of fear they face feel a bit shoehorned in to make the film an "epic" three hours. Don't get me wrong, that's not to say there weren't some great scenes in the movie. Just not enough of them to keep me invested and excited to see it again.

All the acting in IT Chapter Two was right on except for the one person I thought would not disappoint - Jessica Chastain. She's not terrible. She just doesn't deliver any sort of energy or charisma to her role the way Sophia Lillis does. Chastain doesn't seem very invested in her character. Let's put it that way. 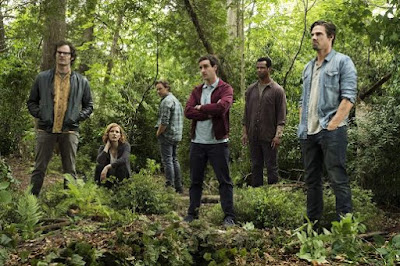 Much of the appeal and energy of IT Chapter Two seems to be missing with the absence of the kids through most of this sequel. I wasn't a huge fan of the first film, but I have to say I think it's a more entertaining movie. I will give props to IT Chapter Two for its use of practical effects, which does give the film a more organic feel at times.

The message of IT Chapter Two seems to be that we all have to face our fears and our pasts to truly move forward and live a healthy and productive life. Social commentary is served on the subjects of bullying and shaming someone's weight and sexual orientation, which I'm sure will cause some controversy among some circles.