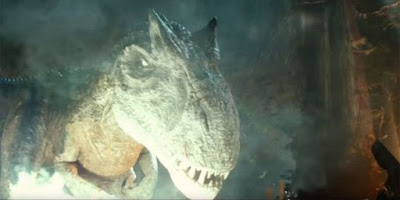 Jurassic World: Battle at Big Rock is everything a fan of Steven Spielberg and Michael Crichton's novel could ever ask for. Packed in one 8-minute short is all the action, suspense, and youthful excitement we've come to expect from the filmmaker that brought us Indiana Jones, Jaws, and other films he financed like The Goonies, E.T., and Back to the Future. You could even make an argument that it could be one of the best sequences ever shot for the dinosaur-based franchise.

The setting of Jurassic World: Battle at Big Rock couldn't be more perfect. A modern day campground filled with different sorts of families and folks cooking out and just sitting around their campfires. Their vacations are all interrupted when a couple triceratops stumble across the grounds. Everyone is terrified at first, but begin to settle down when they realize the prehistoric animals are plant-eaters. Theirs only one massive problem. They've attracted a more dangerous behemoth that has become all too familiar to us all - a very hungry tyrannosaurus rex who's looking a free meal and doesn't discriminate as to what species it eats. 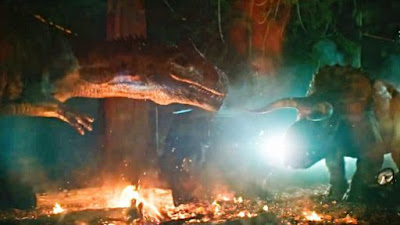 Jurassic World: Battle at Big Rock puts all the right elements together for a jaw-dropping and intense 8-minute adrenaline ride. You have a blended family, which mirrors our society perfectly today. They argue and fuss with each other, but are still fiercely loyal when it counts. Another really cool update to the typical action movie trope is making not only the man the hero of the story, but getting the females of all ages involved in the excitement. Combine that with some truly edge-of-your-seat giant monster tension and you have an excellent bite-sized morsel of terror and adventure for the YouTube generation.

If Jurassic World: Battle at Big Rock is any indication of what to expect from Colin Trevorrow in his next chapter in the hit series of films, I'm eager for more. Honestly, this 8 minute teaser of what's to come reminded me of the chills I got seeing Jurassic Park the first time and the nervousness I experienced when the T-Rex knocked the bus over the edge of the cliff in The Lost World: Jurassic Park. My anticipation for the next Jurassic World has just been bumped up a notch.

BATTLE AT BIG ROCK is an all-new short film directed by Colin Trevorrow, written by Trevorrow and Emily Carmichael.

The short takes place one year after the events of the last Jurassic World film in Big Rock National Park, where dinosaurs are now living in our world. The story follows a family of four whose encounter with these wild animals becomes a terrifying fight for survival.