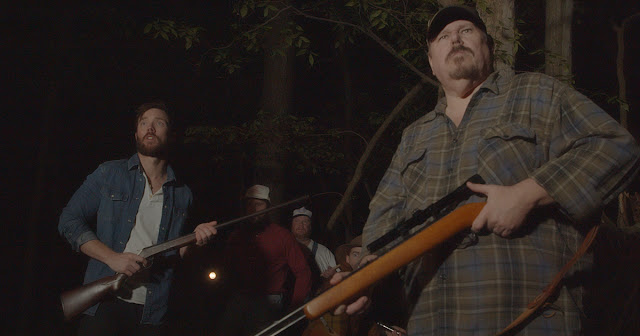 Seth Breedlove, Lyle Blackburn and the rest of the Small Town Monsters crew are back with their newest film Momo: The Missouri Monster. The STM crew have been on a role recently with such paranormal documentaries as The Flatwoods Monster: A Legacy of Fear, The Bray Road Beast, and Terror in the Skies (which is still the best cryptozoological documentary ever created); but with Momo, director Seth Breedlove switched it up for an homage to the late 70’s low-budget drive-in films like director Charles Pierce’s classic The Legend of Boggy Creek. You know you’re in for something unusual the second the movie starts and you’re greeted with a wall of illustrations from STM’s previous films and an old television set that suddenly comes to life. (For more, click on the link below)

The basic premise of Momo: The Missouri Monster is this: A nearly completed, but mysteriously never released, B-movie about the Missouri cryptid dubbed “Momo” is being shown on a Saturday night, low-budget, horror movie television show ala Svengoolie (but without the over-the-top campiness). This fake show, called Blackburn's Cryptid Case Files, serves to frame the events of the fake film by interjecting actual interviews with real witnesses, location shots, and tell the real story behind this unusual event. The film itself is a loving homage to the low-budget Grindhouse monster movies with the cheesy music, fake film scratches, cheap-as-heck looking suit, and terrible acting… or maybe it isn’t terrible since it’s supposed to be over-the-top… Anyhow, as you watch the fake movie, Lyle Blackburn interrupts with his fake television show (which we just talked about) and there are even transitional images as if they were jumping to or from a commercial.

If you are familiar with the other Small Town Monster documentaries (and if you aren’t, why not) then you know that Lyle Blackburn, famed cryptozoologist and lead singer of Ghoultown, usually narrates the STM films off-camera. This time though, he plays himself playing the host of Blackburn's Cryptid Case Files (which only makes me want this show to actually exist), and while he does interview several cryptozoologists and Fortean experts, cryptozoological titans Cliff Barackman and James “Bobo” Fay of Animal Planet’s Finding Bigfoot fame actually make cameos in the film as local towns people. I won’t give anything away, but if you know Mr. Barackman and Mr. Fay’s very firm no-kill stance on Big Foot, their scene carries a great deal of irony.

So let’s bottom line this: The movie is fun, isn’t too scary for the kids, and there is no objectionable material to be found. If you like cryptids, homages to the old Grindhouse films, or you are looking for something genuinely interesting and unique, go see Momo: The Missouri Monster. It debuts September 20th and will be available nationwide on DVD, as well as Vimeo OnDemand, Amazon Instant Video, as well as VIDI Space.