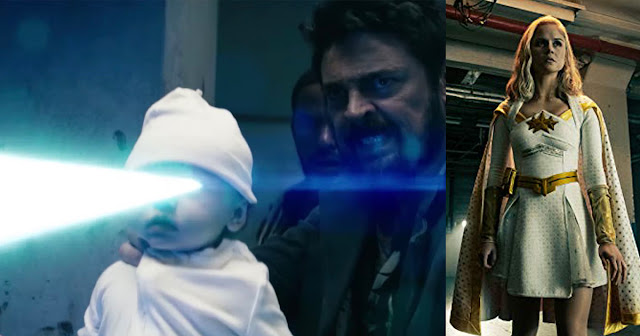 Okay so before we get into the nitty-gritty on this one we need to discuss the nitty-gritty. This series earns its mature rating honestly through violence, nudity, swearing, and adult content. Summed up, the show is a hard “R” rating, but not more than that either. It’s on par with 2009’s Watchmen film, which is sort of surprising given its source material. Without any spoilers, Amazon’s adaptation is true to the best parts of the original comic, but is vastly superior story-wise. This show is highly addictive and nearly impossible not to binge-watch. If you were a fan of the Watchmen film, or you really enjoy dark, edgy genre films that enjoys good tongue-in-cheek humor (and isn’t afraid to get philosophical), then this is for you. Now, I have a bit more to say (some of which strays into minor spoiler territory), so if you’re interested click the “More” button below.

Just for some context, The Boys was created and written by Garth Ennis who is most well-known for his comic Preacher (which was also made into a television series on AMC). Mr. Ennis’ work is famous for its exploration of dark and explicit material, of which The Boys was intended to be the most obscene. While the concept behind the original comic was interesting, Ennis spent all of his time wallowing in how far he could push the envelope so as to offend the reader; and the storytelling often suffered because of this. But what Amazon did here is similar to what it did with the Tick (MGF review of that series), where they took all of the best elements from the original comic and focused on telling the best story that they could.

While Karl Urban’s Billy Butcher is ripped straight from the comics, Jack Quaid’s “Wee” Hughie is remarkably distinct from the character Ennis wrote. Where Ennis’ original concept was that of a slacker based on Simon Pegg’s character from the BBC show Spaced (Pegg plays Hughie’s father as an inside joke in the show), Quaid’s version is a hard-worker and quite competent. Another major departure from Ennis’ work is that the superheroes aren’t all utterly debauched cretins with zero empathy; rather they are frail and damaged humans living in a very precarious spotlight. Don’t get me wrong, many of these characters are depicted as perverts and predators, but it certainly isn’t all of them and it certainly isn’t to the same degree as the comics. All of these heroes have recognizable failings and fears born out of their celebrity, all of which is keenly felt anytime Erin Moriarty’s Starlight is on screen.

Starlight is the idealistic young superhero who’s dream of making it big have finally come true. She’s chosen to become one of the Seven (an obvious parody of the Justice League) and now is one of the earth's protectors. She honestly wants to save the world and make it a better place only to find that all of the crimes she is supposed to fight are scheduled by Vought International, the company that sponsors all of the superheroes and makes billions marketing them. Every step along the way she is forced to compromise and become something she doesn’t want to be in order to keep this position and make her new employer happy. Ms. Moriarty’s portrayal is spot-on and makes you feel how powerless and trapped she becomes by a system that was specifically created to exploit her. But while Elisabeth Shue’s Madelyn Stillwell controls Starlight, and all of the superheroes, by manipulating their fear over losing their reputations, celebrity, and money; it is Anthony Starr’s Homelander that creates genuine terror.

Homelander is this universe’s version of Superman, with a little bit of Captain America’s aesthetic thrown in to complete the metaphor, and he is the show’s primary (physical) antagonist (no real surprise if you’ve seen ANY of the promotional material). What makes Homelander truly disturbing is how NO ONE will even dare to make him upset in the least. He smiles and says things that are clearly designed to be offensive in a well-meaning way (you’ll understand when you watch the show) and people laugh or say “thank you” because everyone is in mortal terror of him. Even the other superheroes treat him with kid gloves because they know that despite their powers, he could easily kill every one of them instantly. The real genius of the show, however, is that even Homelander becomes a sympathetic character.

All of these characters feel like real people and then become metaphors for how we lose touch with one another, and ourselves; how we are blinded by our desire for power and fame, or approval from a loved one. Okay, we’re about to hit a minor spoiler, so you’re warned, but much of the heart of this show comes from Hughie and Starlight’s interaction, which culminates in a scene at a Christian rally sponsored by superheroes. During this episode we’re shown Garth Ennis’ view on religion, Christianity specifically, through Billy Butcher’s antagonism of a vendor but at the end we have a moment between Hughie and an angered Starlight who has just confessed her doubt in religion, her compromises to be on the Seven, and a feeling of betrayal from Hughie as well. It is here where Hughie confesses that his girlfriend Robin had recently died and that he was looking for meaning and answers at the rally (true in a metaphorical sense), only to find none. The only thing that stood out, that gave him a sense of truth, was Starlight’s speech where she admits to not having answers and feeling betrayed by people who claim that they do.

Ultimately, at the heart of Amazon’s adaptation of the Boys is a singular message: People are all flawed. We lie about who we are; creating facades of supposed respectability in hopes we’ll be loved and accepted. But these false personas only engender the false “love and acceptance” of attention; a thing fickle and shallow. To be happy and loved we need real human connections that are honest with others and ourselves. A connection that can admit it is just as lost as everyone else but is willing to be there with you through it. I think it’s a message we can all take to heart, and message we don’t get often enough from movies or shows that have babies slicing people in half with their laser eyes.