Martin Freeman Thinks He'll Be Back for Black Panther 2 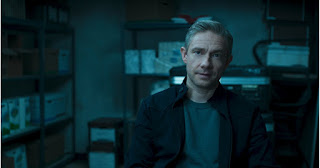 We got a lot of ground, space, and lightyears to cover before Marvel releases a sequel to Black Panther. Black Panther 2 wasn’t part of Kevin Fiege‘s stacked Phase 4 announcement at San Diego Comic-Con, but given the fact the first movie made a cool $1.3 billion worldwide, a return trip to Wakanda with Chadwick Boseman‘s T’Challa is pretty much a given. And, apparently, Martin Freeman‘s CIA Agent Everett Ross will once again be along for the ride. More >>
Newer Post Older Post Home