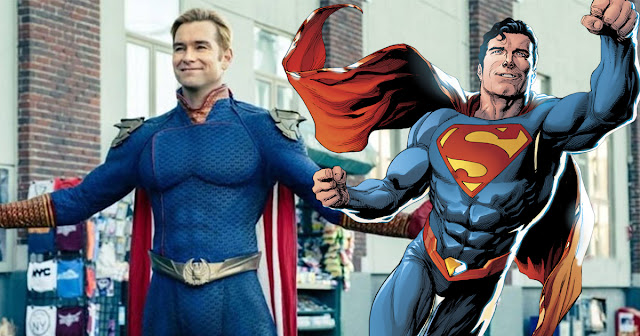 My father was a mechanic who owned his own shop and I had to bust my knuckles on cars for years to help out. Long story short, I wasn’t a great mechanic but I learned a lot about how fragile cars really are; and, sufficient to say that, one of the most unbelievable aspects of superhero comics for me wasn’t the powers, it was them catching cars. Superman was always the worst about this, picking up and holding cars by their bumpers or the fenders, but over the years I started to ask if there was a reason Clark could do this. Could there be a workable, in-universe, reason Kal-El could lift and hold cars by their most fragile areas without damaging them? Well, I did find that theory and episode four of Amazon Prime’s new series The Boys validates it.

Without spoiling anything, episode four contains a conversation between Homelander and Queen Maeve about the why Homelander cannot physically save a crashing 747 by catching or supporting it the way we have seen Superman do countless times. This is so counter to what we we’re used to from the superhero genre that not only did we talk about it on our last episode (you can watch it here), but my sister even texted me about it. Until this scene no one had thought about a hero like Homelander (The Boys’ Superman stand-in) needing something to stand on to give him leverage in order to lift a heavy object like a car or plane. Basic physics tells us that for every action there is an equal and opposite reaction, so while in-flight Homlander is standing on air and there anything for him to exert force equal to the plane; and that’s assuming the plane doesn’t tear itself apart under the stress of him grabbing it. If Superman’s super-strength were based on his muscles, like Homelander, the same thing would happen to him… but it doesn’t and I think DC comics has inadvertently given us an answer to this physics conundrum: Tactile Telekinesis.

So the idea of tactile telekinesis (TTK moving forward) goes back to when Supergirl was a protoplasmic construct (it’s a long, and weird, story). Where standard telekinesis allows a person’s aura to stretch out and move objects with their minds, TTK requires physical contact. For example, you touch a door and pick the lock telekinetically or touch the bumper of a car and unbuckle everyone inside. This would allow Superman to catch a plane, instantly expand his TTK field around the plane thus distributing the stress over the entire frame. This field would also allow him to catch people who are falling at terminal velocity (something he does quite frequently) without them being snapped in half or exploding like a water balloon. The field also explains how he can crush coal into a diamond. To achieve this Clark would have to exert somewhere around 725,000 pounds per square inch (if Google is to be believed) with his bare hands. If it only takes 1,700 pounds per square inch to break a human femur (an extremely stout bone), how does Superman go about his normal day without destroying everything around him? Have you ever been around a professional power lifter? There is a reason the phrase “doesn’t know their own strength” exists. Simply put, there is no amount of self-control that could explain him being able to type on a laptop or handle a ceramic mug and still perform these amazing feats of strength, unless his strength wasn’t based on his muscles.

If Clark’s natural physical strength is similar to that of normal humans (and it is as we have seen when he loses his powers) then it would stand to reason that he lives his life using his normal physical strength and then uses his TTK field to provide whatever extra strength is required to move or lift the object in question. This shouldn’t come as a surprise to comic fans as the clone Superboy (both the 90’s and the New 52 reboot) had TTK. Moreover, the New 52 version’s TTK abilities were the only abilities he started off with and he was able to use it as a of force-field to protect himself and even lift heavy objects… sound familiar?

It’s long been established that the reason (post-Crisis) Superman’s costume would remain intact while the cape would burn or tear was due to Clark’s aura. This “invulnerable field” emanates off of his skin a few millimeters which would in turn protect the skin-tight spandex. All I’m suggesting is that this same impervious aura is actually a TTK field similar to the one that New 52 Superboy (a clone of Superman) canonically possesses; and that this field best explains Superman’s super-strength, invulnerability, and ability to fly.

Kal-El’s powers being an extension of his TTK field also explains certain inconsistencies with his powers as they relate to kryptonite. For example, kryptonite (which is a radioactive crystal) can be shaped and then fired as bullets that penetrate Superman’s skin. Regardless of kryptonite’s radioactivity being highly toxic to Kal-El’s body, if his skin were super dense the bullet would shatter upon impact. But if his invulnerability were exclusively due to an energy field, then the radiation would disrupt that field upon arrival and pierce his very human-like flesh. This also similarly explains his vulnerability to magical items or beings. We’ve seen Wonder Woman or other magic wielder have some difficulty dealing with super-dense alloys or materials, but when Clark (in the final issue of Kingdom Come) is checking the edge of Diana’s enchanted sword he cuts himself. Why would the sword be so much more effective on him than military grade steel, unless it is bypassing the TTK field his body is emitting?

While this could go on and on, let me sum up by saying the following: We know that Superman has an invulnerable aura that is similar to New 52 Superboy’s Tactile Telekinesis field. A TTK field would allow him to pick up large and heavy objects in ways that should rip them apart, like grabbing the undercarriage of a plane or fender of a car. It would also explain his ability to fly (levitation) and his ability to lift heavy objects in flight though there is nothing beneath him to provide leverage (he’s just levitating the object). Superman’s powers being psionically based and not physically based is what gives him an edge over Homlander and make him the hero we love so much. If you dig this article, share it and let us know! We’ll catch you next time.