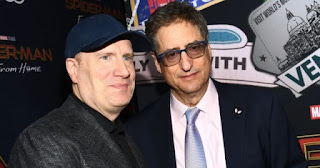 Marvel Studios president Kevin Feige won’t produce any further Spider-Man films because of an inability by Disney and Sony Pictures to reach new terms that would have given the former a co-financing stake going forward. A dispute that has taken place over the past few months at the top of Disney and Sony has essentially nixed Feige, and the future involvement of Marvel from the Spider-Man universe, sources said. More >>
Newer Post Older Post Home