ARROW's Final Season 'Like an Event Series' According to AMELL 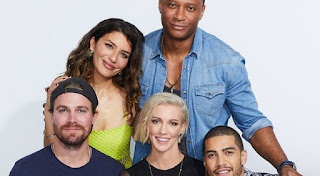 The upcoming final season of CW's Arrow is about "destiny" according to long-time executive producer Marc Guggenheim - but not just accepting it. "All the characters are facing some version of their destiny," Guggenheim told Newsarama. "They have to react to it, confront it, and in a lot of cases rise above it." More >>
Newer Post Older Post Home