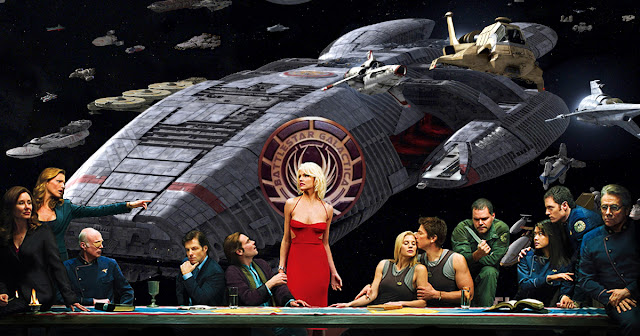 I recently reviewed one of my favorite shows, Babylon 5 (link here), because it debuted 27 years ago. But recently I’ve been re-watching the Battlestar Galactica reboot done by the SYFY channel back when it was called the “Sci-Fi Channel” (I still hate the “SYFY” thing, it’s just weird). During my re-watch I noticed that it was given the tag ’04 to make it stand out from the original series. I then realized that my own son was only a year old when this show was released and he’s driving age now, so how many people who were in their early teens or younger that when it came out that have never seen it? Thus I figured a full (no spoiler) review was more than appropriate.

Filmed in a shaky-cam documentary style with CGI that still holds up, the Battlestar Galactica reboot (BSG ’04 moving forward) is the spiritual descendant of Babylon 5. Like Babylon 5, it is an emotionally complex story that uses key figures to explore the epic Wagnerian drama that drives the story. Even in the dogfights the Vipers will use the “spin on their axis to shoot backwards” maneuvers that Babylon 5 introduced into the sci-fi space battle genre. But beyond the aesthetics and attempts at a more grounded feel to the show, the real legacy of B5 that BSG ’04 gets right: every character is flawed, broken, and ultimately human.

The show never shies away from hard questions about life, suffering, politics, religion, forgiveness and regret. Where most sci-fi shows look for easy answers and resolutions, BSG ’04 gives you realistic problems and very human characters trying to figure them out. A central theme to the show is the delicate balance between pragmatism and idealism. Where a Picard or a Janeway are usually rewarded for their idealistic views of the world, Adama (the military leader of the fleet) deals with the consequences the world usually dishes out when your ideology doesn’t account for reality. In fact, often times the problems live in a world of grey; born out of humans failing morally or psychologically due to stress or ego, just like in the world we all inhabit. The characters of BSG ’04 marry the wrong people, love the wrong people, are self-destructive, make mistakes and constantly second guess themselves. While this would seem like a miserable, navel-gazing mess, I assure you it is anything but that.

BSG ’04 is fun, and ultimately uplifting because it is predicated on hope, a hope that we often forget or lose sight of in our day-to-day routine, just like they do. Characters lose their way but find their way back, enemies become friends, and friends become families. This show explores what it means to be human without covering up our failures or ignoring our successes. And it can do this while being exciting and fun because amongst the human drama, realistic battle tactics, and philosophical exposition each episode is packed with story. At no point do you feel bogged down or like you’re watching a filler episode. The writers of BSG ’04 had a story to tell and they were going to tell it, which leads me to my last point: the story.

I promised no spoilers and I’ll stick to it, so I’ll need to be very precise for the rest of this. As I noted earlier, the writers use individuals to explore this epic narrative where the very survival of the human race hangs in the balance and in doing so explores mankind’s relationship with religion and the meta-physical. Where Babylon 5 changed science fiction’s relationship with religion by acknowledging the importance of religion in people’s lives, BSG ’04 not just embraces religion in general but people’s religious experiences and the idea of the supernatural itself. Far from rejecting the supernatural elements of our reality, the writers of BSG ’04 actually make the supernatural a character in the show. That sounds odd, I know, but it is true. The invisible (and not-so-invisible) hand of the supernatural is at work in nearly every episode and the writers utilize it so well. The show has a definite and interesting perspective and yet never becomes preachy, rather it asks you to explore this reality with the show through the eyes of atheists, believers, agnostics and those who aren’t really sure what they are. Just as the writers never flinch from real human pain and tragedy, the writers don’t hide from the ugly side of religion, the terrible things we do in its name, but it also never demeans religion or undermines its importance. Rather the writers do an excellent job of pointing out and showing that the problems of the world aren’t the fault of angels, gods, God, or the universe… but humanity.

Ultimately, the question BSG ’04 asks is: Does humanity deserve to live? With all our faults, our jealousies, our ego, our insecurities, do we as a species deserve to live? Do we as individuals have value? The show gives us an answer, if you’re willing to work on it. I won’t spoil it here, but I will say this. If you want a great show that isn’t afraid to ask the hard questions and make you work for the answers, then I suggest you watch Battlestar Galactica ’04.

P.S. This doesn’t really fit into the article I was writing but I really wanted to talk about the aesthetics of the show so I’m doing it here. As an artist I love this show’s decision to use many real-world objects (mostly old) to give everything a grounded feeling. Even though the cultures that make-up the BSG ’04 universe aren’t from earth, they are humans living in a universe not unlike our own so they would make tools and technology and uniforms and artwork that is familiar to us. Perhaps my favorite little nugget of the real-world, are the Czechoslovakian made pistols used as side-arms. I noticed this because my father had a weird love of the CZ 50 which is often wielded by the Viper pilots in their adventures. By using these real-world objects the show feels very familiar the people feel very familiar and in that way we relate to them more.

I also really appreciate that the command deck of the Galactica looks like a sci-fi version of a submarine. There’s no centralized armchair with a big screen, there’s a centralized display that just shows blips and data, there’s a large lighted table used to chart navigation and play out battle plans. Everything from the dot-matrix printers and corded phones that receive static filled and modulated radio transmissions adds to this sense of realism. Odds are when we’re blasting at each other with our own spaceships it won’t quite look like this, but it’ll sure as the world will look a lot more like this than the bridge of the Enterprise.