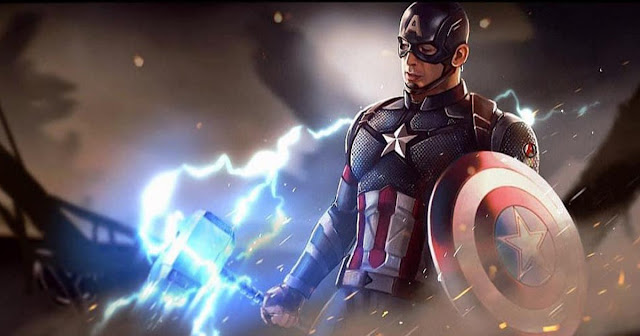 One of my favorite scenes in Endgame is Captain America wielding Mjolnir against Thanos, and judging by the response in my theater (and the internet) it was among everyone else’s as well. As a lifelong comic book reader, it was a dream come true to see him hurling Thor’s famous mallet at their biggest foe. But the question of when MCU Captain America became able to summon it has been asked by several sites since he couldn’t lift Mjolnir in Avengers: Age of Ultron. Normally I’d have left this alone, but so many people (like MatPat of Game Theory and Film Theory) are buying a cop-out answer that I felt it should be addressed.


Firstly, for those who are unaware of the situation, let me catch you up: In Avengers: Age of Ultron the heroes try to lift Thor’s hammer Mjolnir (Mew-mew if you’re Kat Dennings) and universally fail, proving they are all unworthy. Later in the film, the newly born Vision easily hands the enchanted weapon to Thor demonstrating that he could be trusted. One little proviso, however, is that when Steve makes his attempt in the aforementioned scene, it budges just a bit. Now the Russo Brothers, in an interview with Business Insider (and everywhere else) said the following:

Joe Russo: "I think in 'Age of Ultron' he may have not picked up the hammer in order to not embarrass Thor,"

Anthony Russo: "That's the way we think of it,"

This seems pretty definitive and I don’t blame anyone for accepting it, after all they made the movie… but there is one catch: they made Endgame not Age of Ultron. This is not a minor point of disagreement either, Vision’s ability to lift Mjolnir is crucial to the story Joss Whedon was telling, therefore Cap was unworthy. So how do we reconcile this? The answer is found in the mantra repeated throughout Endgame, “whatever it takes.”

These three words are central to understanding what changed in Steve Rogers to make him worthy of the power of Thor. Remember back to the Captain America we saw in Age of Ultron, Civil War, and Infinity War. While willing to sacrifice himself, he would not allow someone else to sacrifice themselves under his order. Steve even states this position explicitly in Infinity War when he says, “We don’t trade lives.” This philosophy is central to understanding why he sides against Tony (and Vision who is worthy to hold Mjolnir) in Civil War. Steve opposed the Sokovia Accords because he felt that if there was a situation that he should fix, he wanted to be able to fix it. Noble, certainly, but please stop to think about what he is actually saying: “I (Steve Rogers with access to some of the most powerful and unstable humans on the planet) believe I should be able to go into another nation whenever I want, without their permission, and engage in full scale military operations without back-up or concern for civilians.”

If that sounds uncharitable, might I point out the event in South Africa where the Avengers all but destroy Johannesburg because they can’t control the Hulk. Let’s be unrealistically generous and state that no civilians were killed or maimed, the fight still caused billions of dollars in damage. How many people were left destitute because they lost the car they needed to get to work, or had no work to go to? Even if insurance or Stark Enterprises did pay for the damages, they certainly didn’t cover lost wages and it certainly wasn’t quick. These kinds of events take years to litigate, and as we saw in Spider-Man: Homecoming, the Avengers don’t care about what happens to the little guy. They may feel bad about it, but that won’t stop them from fielding an unpredictable, uncontrollable, living nuclear weapon in heavily populated areas. And that arrogance, the belief that every problem requires you to solve it, regardless of the casualties is what made Thor unworthy in the original Thor film.

It has been a few years so let’s recap that situation. Thor is about to become king, Frost Giants sneak into the Asgardian vault of super-cool-deadly-knick-knacks-and-knockoffs to steal the Casket of Ancient Winters, the Destroyer turns them into Kentucky Fried Intruder, and Odin’s response is: “cool, let’s eat.” Thor believes that this attempt at stealing a cosmic WMD requires retaliation but Odin castigates him for his disregard of innocents who die in the crossfire. Odin pointed out that the individuals who attempted to steal the Caskey were killed, while the weakness in their security would be found and corrected, there was simply no NEED for more bloodshed. Odin was willing to forgive the offense because his responsibility was the peace and protection of the ENTIRE Nine Realms, not just Asgard. Though not their king, Odin’s responsibility to the Nine Realms require him to be concerned with those in Jotunheim and value their lives as well.

Many have asked what it takes to be “worthy” to hold Mjolnir and it is this context that matters the most. It isn’t about self-sacrifice per se, but whether or not the person is fit to rule Asgard wisely and with compassion. That means being willing to put your own desires aside for the greater good, something Captain America wasn’t able to do until Thanos’ snap. His sense of righteousness prevented him from sacrificing Vision for the greater good and from accepting limitations on his actions. The Snap changed that. For the first time, Cap had to come face-to-face with his own failure and it made him a better person.

As I noted in my previous article about why Falcon was a bad choice to replace Cap in the comics (but perfect in the MCU), MCU Cap is searching for his place in the world. He clearly is doing his best, but he doesn’t feel that he fits and it is easily summed up by Frigga in Endgame when she says:

"Everyone fails at who they're supposed to be, Thor. The measure of a person, of a... a hero, is how well they succeed at being who they are."

Thanos forced Steve Rogers to come to terms with who he is and it forces him to be a better person, a more complete person. A person who was willing to make unthinkable sacrifices to save everyone.

Sorry Russo Bros, and all those led astray, Cap wasn’t worthy in Age of Ultron and he wasn’t trying to protect Thor’s fragile ego. He was a good man who was lost, as we all get from time-to-time, and finally found his way. This is why Thor proclaimed, “I knew it” when Mjolnir flew into Steve’s hand; Thor believed that Cap had become worthy because he recognized the change that comes from being humbled. Thor could see that Steve had mad that leap from being the Captain America he felt he was supposed to be to being Captain America. A Captain America that would do whatever it took to save the world, a Cap that was worthy.
Newer Post Older Post Home