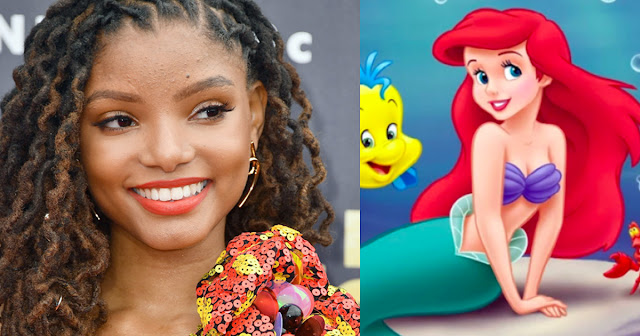 We just can’t have anything nice, can we? So Disney, in its pursuit to avoid creating new IP and milk me of my money by playing on my childhood nostalgia, set their sights on a live-action remake of the Little Mermaid. Well, nothing is sacred so… sure why not? It is then announced that the role of the flippant fictitious fish will go to an actress and singer named Halle Bailey. Just in case you’ve been in a coma (or enjoying the real world) for the last few days, Halle Bailey… isn’t white. ***GASP*** Pearls are clutched and racists run to the internet with OUTRAGE!!!!!!!!!! Which creates counter outrage and virtue signaling… but… here’s the thing: there was no racist outrage… not really.


I know that last statement sounds ridiculous, but I did a little digging and noticed that the "NotMyAriel" hashtag that is trending, is almost universally in support of Ms. Bailey’s casting, not against. So I went back and actually looked at all the tweets used in the media’s “Little Mermaid controversy” articles. It was all the same three or four people who have a handful of followers posting to a “NotMyAriel” account with 26 followers. That’s when I realized that whether the people posting to that account are real or not (several I have my doubts) is irrelevant, what is relevant: these are nobodies, followed by nobodies. This isn’t a major internet “influencer” or organization with millions of people that are up-in-arms, it’s only a few dozen random people. In a nation of 300 million, I can find a handful of people who are outraged by anything (believe me, I’ve looked). So why does an account with 26 followers get national attention? One word: Publicity.

Commercials are expensive and word of mouth for the 59th remake THIS YEAR is difficult, but controversy… well, that gets attention. Clickbait articles about “racist outrage” gets clicks and clicks get ads. That’s it, it’s that simple. Nobody actually cares about Ariel’s skin color, but Disney needs publicity and news sites need clickbait, so a Twitter account with 26 followers is suddenly the most important Twitter account in the world. Yes, this is how the news works… it isn’t pretty. Now, does this mean that Disney cast Ms. Bailey to create controversy? Not at all, she’s a young, attractive up-and-coming singer / actress with a younger fan-base. She seems to be a perfect fit, but Disney did know that someone wouldn’t like it (I’m giving Disney the benefit of the doubt) and certainly pointed it out as soon as it happened. So, we’ve all been played. Our emotions were manipulated, division and contention created for cash… again… but there is one positive.

I don’t usually get to talk about positives, particularly things that actually bode well for our culture as whole, so I look forward to the change of pace. As I read through all of the Twitter posts and Instagram memes, I didn’t see one post that was actually racist. Aside from a few posts from African Americans who saw this casting as pandering, and therefore offensive, every single one that I saw or read focused on the fact that Disney was straying from how the character was originally portrayed. Just like how fans of Jim Grant’s Jack Reacher books were vocally dismayed at Tom Cruise’s casting as the titular character. Tom’s short, lean, black-haired visage is vastly different from the tall, massively muscled, blonde Viking described in the novels. Since we’re all geeks here, remember how controversial it was that Superman’s costume in Man of Steel lacked the red trunks or how… well, just all of Batman was portrayed in Batman V Superman: Dawn of Justice? Or how about when Daniel Craig took over as James Bond and he didn’t dye his hair black? Everything I saw fell into that category, fanboy-ism, not racism.

Look, I’m certain that there is some racist out there who was genuinely outraged over this casting, I’m in no way naïve and I don’t wear rose-colored glasses. Racism and hatred are real things, and I fully expected to see quite a few racist comments, but I didn’t. What I found was just a couple dozen geeks being geeks. Personally, I find that encouraging.