Scooby-Doo, Where Are You! Celebrates 50th Anniversary with Mystery Mansion Giftset 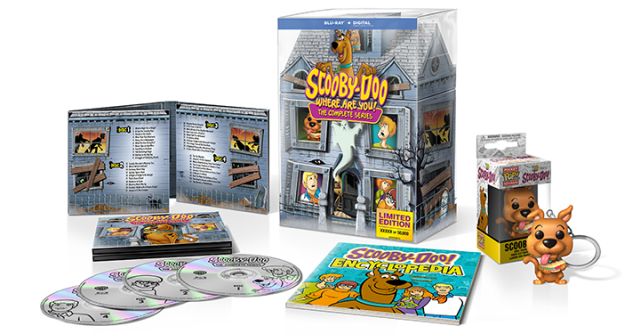 SCOOBY-DOO, WHERE ARE YOU!: THE LIMITED EDITION 50TH ANNIVERSARY MYSTERY MANSION

FEATURES ALL EPISODES OF THE ICONIC SCOOBY-DOO WHERE ARE YOU! SERIES
ON BLU-RAY™ FOR THE FIRST TIME EVER!

Enhanced Content Plus Unique Memorabilia Including an Exclusive Scooby-Doo Funko Keychain and A Mini Scooby-Doo Encyclopedia!

For 50 years, the Mystery Inc. gang has entertained Scooby-Doo fans with zany hijinks, action-packed adventures and engaging mysteries that have captivated viewers of all ages. What started as a Saturday morning cartoon, exploded into an enormously successful franchise encompassing multiple spin-off series, original animated and live action films, consumer products and much more. Now fans have the opportunity to enjoy the original series which launched Scooby-Doo into worldwide stardom.

Scooby-Doo follows the adventures of four teens, Fred, Daphne, Velma, Shaggy and his lovable, but cowardly Great Dane, Scooby-Doo, as they travel far and wide in their stylish van, the Mystery Machine, to solve mysteries involving ghosts, monsters and other supernatural forces. Their entertaining adventures are always filled with hilarious hijinks and sometimes even catchy musical moments. Through teamwork and clever investigation, the teen sleuths solve case after case, while unmasking the villains who are usually behind each of the mysteries they encounter.

“We are thrilled to celebrate the golden anniversary of Scooby-Doo, with the release of this gorgeous, limited edition, collectible set,” said Mary Ellen Thomas, Vice President Family & Animation Marketing. She added, “The original Scooby-Doo! Where are You! series is an iconic cartoon that has captivated audiences for generations. We are delighted to release the series on Blu-ray™ for the first time ever. Scooby-Doo fans and collectors won’t want to miss the chance to own this unique, classic animation collectible.” 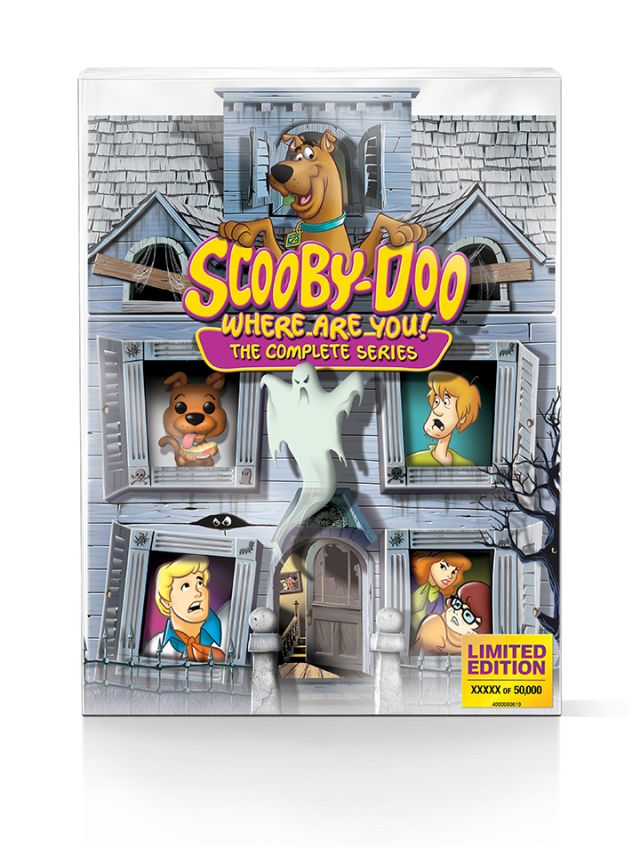 Frank Welker is the only voice actor to work on Scooby-Doo in its many incarnations, since the very first series debuted in 1969. Welker has been the voice of Freddy since the beginning and has provided the voice of Scooby-Doo since 2002. My Life with Scooby is a personal look at the seminal voice actor’s five-decade body of work on Scooby-Doo, complete with personal stories and fun memories from the recording booth.

· A Scooby-Doo for Everyone (Featurette):

The iconic look and feel of the original Scooby-Doo cartoon is a beloved classic… and within 50 years of animated adventures, WB Animation has created a host of different versions of the series for each new generation.  From the kid-friendly approach of A Pup Named Scooby-Doo to the envisioned look of Be Cool Scooby-Doo, WB Animation has consistently reimagined the characters in fun and exciting ways over five decades.  Interviews with the animators behind the many different Scooby-Doo versions, reveal the compelling creative process.

A narrated history of the cultural impact of everyone’s favorite mystery-solving gang over the last 50 years.  This fun-filled featurette is brought to life by interviews with creatives and cultural historians, plus clips from the TV series, films, toys lines, Warner Bros. World Abu Dhabi Scooby-Doo ride, and upcoming animated feature…Scoob.

· Scooby-Doo and the Lost City of Gold Trailer:

A sneak peak of the all-new Scooby-Doo! Live stage production.

· Get the Picture: How to draw Scooby-Doo and the Gang.

· Hanna-Barbera: From H to B: Uncover how the studio’s artists and animators collaborate internally and connect with fans externally.

· Scooby-Doo The Whole World Loves You!: It’s a fun-filled exploration of the world’s on-going love affair with all things Scooby-Doo.  With interviews with actors, writers, and directors of various Scooby-Doo TV series and movies from the last 50 years.

· The Eerie Mystery of the Scooby-Doo History: This featurette talks about the beginnings of Scooby-Doo and how the show came to exist from the point of view of the executives and creative team behind the show.

· The Scooby-Doo Gang: In Their Own Words: This featurette talks about the original voice cast of Scooby-Doo and how they originated the characters’ distinctive voices.

Scooby-Doo, Where Are You!:

1. What a Night for a Knight

2. A Clue for Scooby-Doo

3. Hassle in the Castle

4. Mine Your Own Business

5. Decoy for a Dognapper

11. A Gaggle of Galloping Ghosts

16. A Night of Fright Is No Delight

20. Scooby’s Night with a Frozen Fright

28. A Creepy Tangle in the Bermuda Triangle

30. A Highlight Fling with a Monstrous Thing

31. A Scary Night With a Snow Beast Fright

34. The Creepy Creature of Vulture’s Claw

35. Who Was That Cat Creature I Saw You With Last Night? (a.k.a. Make A Beeline Away From That Feline)

39. Don’t Go Near the Fortress of Fear

40. The Beast is Awake in Bottomless Lake