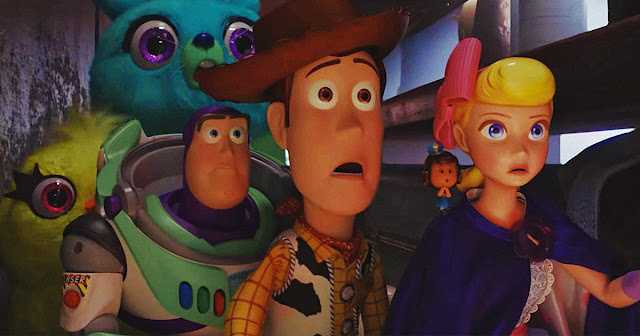 Okay, let me get down to brass tacks: This movie is genuinely hilarious and has a surprising amount of heart, even for a Pixar film. The greatness of Toy Story 4 is immediate with the first scene of the film and continues until the very last one (mid-credits). This film is easily the best of the series and builds heavily on the themes from the previous entries, yet gives us something new. If you’ve grown to love (or even grown up) with the Toy Story franchise over the last 24 years you will not be disappointed.

If you want a more in-depth review (no real spoilers beyond what you’ve seen in the trailers) then follow the link below!

While I’ve already told you that this movie is great, I also need to be honest with you: I wasn’t looking forward to this entry into the franchise. I mean, how many times can we see toys go over hill-and-dale to prove that they love their kid who needs them while convincing another toy that being loved by a child is the greatest thing a toy can experience? Well, apparently the answer is four, and they manage to make this the best version of the story by changing up the dynamic. Where the other films were ensemble-buddy flicks that had action and adventure, this is very much a Woody-centric romantic-adventure. Certainly the other cast members have their moments and Buzz gets the bulk of that time, but the vast majority of the film goes to Woody.

Where Toy Story 1 gave us a Woody that was selfish and jealous of not being the favorite toy, Toy Story 4 gives us a Woody that has grown but is dealing with the fact that Bonnie just doesn’t need him anymore. What does that mean for his sense of purpose and meaning? How does he move forward in a world where he isn’t loved by a child? Moreover, we’re given a glimpse into a wider world of lost toys and a heartbreaking answer for why Woody’s love interest (Annie Potts’ Bo Peep) was missing in Toy Story 3. Tom Hanks’ performance is spot on, giving us a Woody that may not be broken but is in real existential pain. It is this pain, of uncertainty, of regret, that makes Woody all the more heroic and selfless in the third act.

We all thought we’d said our film farewells to the beloved motley crew of living toys that introduced us to Pixar’s pioneering computer animated universe with 2010’s Toy Story 3. Sure there were a few shorts made for the Disney channel and specials on ABC that let us drop in on Woody and the gang, but as far as the movies go we were done. Andy had transferred the toys to Bonnie where they would be loved forever, the end, we could all move on. Nope. Pixar decided that Woody had to rope us in one-last-time to give us a more final farewell, not just to this series but to Pixar sequels entirely. I don’t know that I entirely buy it, but that’s the story and it does have a sense of symmetry. Woody and Buzz ushered in the Pixar era and they are shutting down the era of sequels and introducing a new period. As far as send-offs go, this was pretty good. It is emotionally satisfying and heartfelt. Adieu my good plastic cowboy. Adieu.