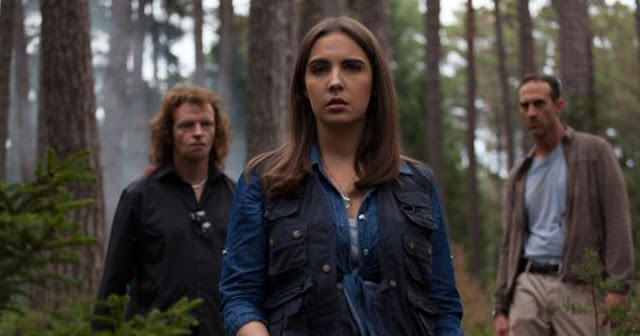 You know something bad is about to happen when your mother, girlfriend, wife, or pretty much anyone starts the conversation with, “We need to talk.” In the same way, you know what I’m about to type cannot be good when I start with, “Before we begin…” That being said… Before we begin, let me say that when I review a movie or television show I do so not expecting it to be aimed at me. I understand that everything has an audience and can be excellent whether it is something I’m into or not and try to be as honest a critic as I can. So when I began watching Cesare P. Libardi di K.’s Landing Lake it was obvious from the first few seconds that it falls into the “Saturday afternoon SyFy channel” kind of flick (which is no insult, I love a good B-movie matinee on the SyFy channel). My point is I’m not measuring this against the original Alien or the Magnificent Seven, I’m judging it against the other films of this genre as objectively as I can… okay, enough equivocating, this movie is awful. Not completely unwatchable, but “I would rather do dishes than watch this” awful. If you want to know why this movie is dreadful, follow the link below.


You’re here so I assume you want the truth, but I also will be very light on spoilers because I know some people are still going to watch this movie (I’m assuming you’re punishing yourself) and I don’t want to spoil it for you. To be perfectly clear, this film is in the “direct to video B-Movie sci-fi horror” genre, and not the “campy B-Movie sci-fi horror” genre. Landing Lake is profoundly sincere in the story it is trying to tell… badly. Even accounting for and removing any aesthetic or editing critiques because it is pretty par for the course on that regard, the movie is just bad. Nothing about this movie works, nothing makes sense about how the characters behave or what their motivations are, even after the movie is done and all is (somewhat) revealed only two or three of the seven characters really make sense.

And it isn’t because I didn’t get the Twin Peaks (the show not the restaurants) vibe they were going for. I like mystery, I like when I’m asking questions, I love Doctor Who for crying out loud, I’m down for complex! I’m just not down for poorly written convolution. A perfect example is that after the characters discover that they are in some kind of “force field” (that didn’t prevent them from entering) at the beginning of the second act, they change the rules for absolutely no reason to kill one of the characters. By the way, this is not some random rule change, it is a profound change to the set-up and it is never addressed again. I cannot stress how this event should have made the main characters say, “Well, obviously we were wrong in ALL of our assumptions.” But they don’t. Moreover, Victoire Vecchierini’s Georgie (the main female lead) is the story’s POV and this is very clearly established almost immediately. Sure, the movie did show you events that Georgie didn’t participate in but it never shifted focus away from her. Yet during the film’s climax the POV shifts to another character for no reason whatsoever.

What’s worse is that this is a really interesting concept with a few (let me stress few) really interesting characters that if presented in a different manner could have been a hit. More frustratingly, there are a couple of scenes that are well done, clever even. The final 30 seconds of the film may actually be the best, not because it ends, but because it is genuinely interesting. Sufficient to say this is a movie that has a few good moments and an interesting concept that makes it watchable, but it is buried under a mess of poorly conceived characters and even worse story telling. If someone who knows how stories work gets the rights to remake this movie then I’m on board, but until that time I cannot in good conscience advise anyone watch this movie for any reason whatsoever.

3) The main female lead sexually assaults one of the other female characters. It isn’t graphic, there is no nudity, but it happens on camera

4) The story… Just the whole thing