Jason’s Soapbox: Why Captain Falcon Works in the MCU but NOT in the Comics 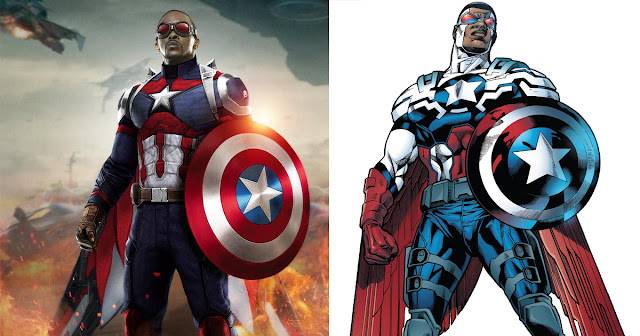 On our vodcast (Vagabond Nerds), we did a review of Avengers: Endgame (like every geek culture show, everywhere did). During the conversation, one of my illustrious co-hosts mentioned that I wasn’t a fan of Sam Wilson receiving Captain America’s shield during the film’s denouement. I corrected him by pointing out that I actually thought it was very appropriate for the film but I didn’t like it in the comics. We didn’t get a lot of time to discuss why, and since it has come up several times, I thought I’d explain my position.

Why Falcon becoming Captain America in the films is a positive: Though the MCU is a massive film empire with 22 movies and numerous television shows under its belt, it hasn’t had sixty plus years to build a mythos like the comics have. Because of this, there is no history of anyone else ever being Captain America in film universe. To the MCU, and the VAST majority of people watching the movies, Captain America is Chris Evans’ Steve Rogers; it is his codename, not a title to be passed on. By Steve Rogers choosing to give his shield to Sam Wilson he changed the nature of what Captain America was and what it meant.

As for potential candidates, this version of Steve Rogers wasn’t about to pass it on to Bucky. Steve’s literally spent the bulk of his films trying to save his best friend from what HYDRA did to him. Steve wants Bucky to live his own life, not one chosen for him. Moreover, after everything that has happened to Bucky, he just isn’t the kind of leader that the Avengers, or the world, needs. Now to explain why this version of Sam is the perfect choice we need to talk about how Falcon is portrayed in the comics and contrast that with how he differs from the films.

Okay, Sam Wilson’s full origin in the comics is… well, complicated. Let’s just sum it up by saying that he was a social worker who became the Falcon to liberate an enslaved island of natives, and then partnered with Captain America to fight crime before the Black Panther gives him his famous flight suit. In fact, in several alternate versions he’s an agent of SHIELD who builds his own flight suit. But in the films, he’s an elite soldier who uses one of two experimental flight harnesses. This is obvious not just in his use of guns, but his battle tactics. Go back and re-watch the opening sequence of Captain America: Civil War, everything Sam does is what you’d expect a black ops agent or SWAT member to do in the same situation. When Cap and Falcon meet though, it isn’t on the battlefield, rather a running track. Sam wasn’t fighting crime, he was helping soldiers with PTSD, and ultimately that’s the core to understanding MCU Sam and Steve’s friendship: they’re both soldiers trying to figure out how to fit into the world.

Steve Rogers’ whole story arc is him trying to become the Captain America everyone believed he was (we’ll talk about that more in a later article). Once he did, he was able to move on, to find his happiness and contentment. Moreover, his life with Peggy Carter gave him a different view on his own life. He could see how people looked to Captain America for inspiration and guidance. But while the world saw only Steve Rogers as Captain America, Steve Rogers realized Captain America was an idea; and an idea that needed to continue. So where Steve couldn’t have turned to Bucky, he could turn to Sam; a fellow soldier with natural leadership abilities and a big heart. So why didn’t this work in the comics? Well, as I noted earlier, Marvel comics has a long history and comic books have one that’s even longer.

Side-kicks are centrally tied into the tradition of comic books and while a side-kick can be someone who is simply aiding the main hero in his/her quest, usually they are a younger crime fighter that is being trained to replace the mentor. Batman and Robin, the Flash and the brilliantly named Kid-Flash, Aquaman and (equally brilliantly named) Aqualad (DC comics is really big on side-kicks) all have trained and been replaced by their side-kicks. The importance of a side-kick is the idea that a hero recognizes his own mortality, and the need for a new generation to carry on the responsibility of fighting evil. But in the comics, Falcon was never a side-kick. He was a partner.

Sure Cap helped Falcon train in combat, but Falcon was a hero in his own right who partnered with Captain America as an equal. In fact when Steve Rogers retired (in the 70’s) and Roscoe Simons replaced him, it was Falcon who mentored the shortly-lived replacement. By making Sam Wilson replace the de-powered Steve Rogers as Captain America, it retroactively demoted Sam to the role of side-kick and greatly disrespected what Falcon had meant in the comics. While it is fair to say that disrespect was not intended and Sam taking up the Captain America identity honors the character by becoming Captain America, the name “Falcon” lost its importance. This might seem trivial, but it is here that I need to point out that Sam Wilson was the first African America comic hero to not include the word “black” in his code-name. Falcon is an important character and he didn’t need to become Captain America to be legitimized. My second problem: Marvel a better option. 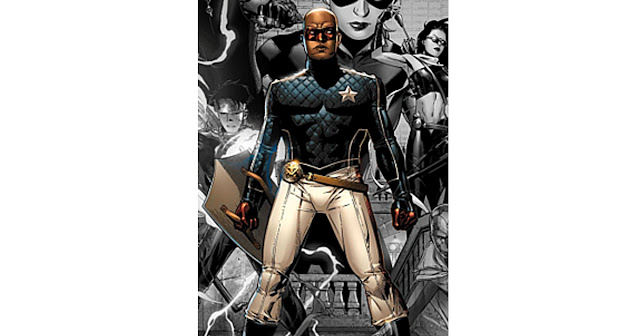 Eli Bradley (AKA Patriot) is the grandchild of Isaiah Bradley, the second Captain America… sort of. Isaiah was part of a group of black American soldiers that the government experimented on in order to re-create the serum that granted Steve Rogers the powers that made him Captain America. Bradley did fight wearing a version of Cap’s costume and shield but was never granted the name of Captain America due to his race. So he was the second Captain America, but also not. Decades later, Eli was severely injured, receives a blood transfusion from his grandfather, and then gains his grandfather’s powers… the powers of Captain America. Also, Eli is even given Cap’s original triangular shield for his career as Patriot and was regarded as such a natural leader that while he was de-powered (over simplification of the situation) he was still asked to lead the Young Avengers.

Eli becoming Captain America, even if just for a few years, would have carried real weight. All of the elements that Marvel was looking for was already there: He’s a natural fit both as a leader but as someone who is trying to figure out what it means to be Captain America; he’s young and therefore has a very different view of how the world works; but most importantly, Eli as Captain America completes a narrative that began with his grandfather. While I could go on for another ten pages about just that last point, let me wrap this up by saying: MCU Falcon becoming Captain America is perfect. It feels right and is consistent with the narratives established in the films. Comic book Falcon becoming Captain America is not only disrespectful to Sam Wilson, it ignores a much more organic and emotionally satisfying story already existing in Eli Bradley’s narrative. Maybe ten years from now when they kill or re-age Steve Rogers again they can get it right.

P.S. To my fellow super-geeks, I did originally include Lemar Hoskins (AKA Battlestar) as an option, but this was getting too long. So, Marvel editors – if you get a chance to read this, show some love to Battlestar. I’m still not happy with what you did to Steel Spider (I haven’t forgotten about that), so giving Lemar some due would be a good way to get back on my good side.
Newer Post Older Post Home