The MCU keeps moving forward with Captain Marvel being released on Blu-ray and other home entertainment platforms on June 11th. However, for those who go the digital route, it's already available via VUDU, Movies Anywhere, and the likes. I wasn't able to see Captain Marvel in the theater, so I was eager to see it as soon as I could since I already saw Avengers: Endgame. I walked away from the viewing experience not quite as satisfied as I wished I was.

Captain Marvel is an extraterrestrial Kree warrior who finds herself caught in the middle of an intergalactic battle between her people and the Skrulls. Living on Earth in 1995, she keeps having recurring memories of another life as U.S. Air Force pilot Carol Danvers. With help from Nick Fury, Captain Marvel tries to uncover the secrets of her past while harnessing her special superpowers to end the war with the evil Skrulls.

Captain Marvel didn't feel as if it was trying to force any sort of agenda on viewers and it felt natural moving from beginning to end. I just thought I'd throw that out there for those out there who were flinging arrows of hate at the movie, calling her a Mary Sue and screaming it was just another excuse for social justice warriors to promote their platform. Is she a strong female lead who doesn't take flack from anyone? Absolutely. That's who I want as a role model for my two-year-old daughter. 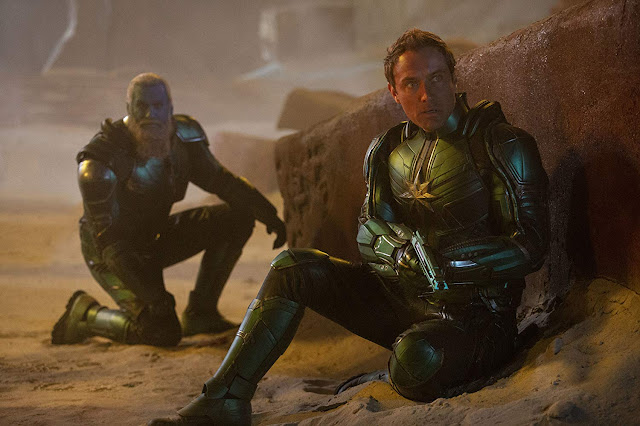 All the performances in Captain Marvel are well delivered and give the characters enough of a depth to care about what they're doing and where they're going within the story. Samuel Jackson gets a lot of screen time to flesh out Nick Fury and he's a lot of fun no matter who he's working onscreen with. Every time something exploded or happened to him, I kept waiting for a string obscenities to come flying out of his mouth. I think it's because he looked so young like he did in earlier more "mature" films I've seen him in. Brie Larson's portrayal of Captain Marvel as a strong, yet sensitive hero really does give a good reason younger audiences should look up to her.

The special effects and CGI for Captain Marvel look good and blend well with the practical effects and actors they're blended with. The de-aging CGI works very well on Samuel Jackson, but looks a bit unnatural when it comes to Greg Clark. It's still nothing that really hinders the story or pulls you too far out of the viewing experience. Captain Marvel is rated PG-13 for sequences of sci-fi violence and action, and brief suggestive language. Right off hand, I can't recall what sort of suggestive language the MPAA is referring to. There a few uses of profanity here and there and the usual comic book violence, but it really is all about normal for superhero movies these days.

Marvel and Disney's first female-led movie is definitely nothing to thumbs down when people ask how it is, but it still wasn't the strong entry in the franchise everyone was hoping for. Although it's connected to the rest of the Marvel movies and universe, it somehow still feels strangely separated. The villains of the film are rather weak as well, and there's no sort of universal threat to mankind. Earth feels like just a cog in the wheel of a bigger galactic story. Great performances from the actors, some great action sequences, and a unique and fun musical score and soundtrack really push this film forward to the finish line.