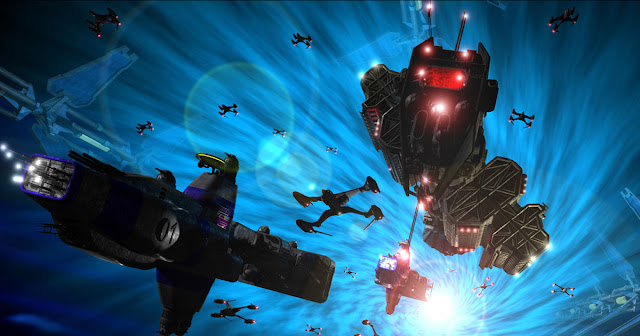 Babylon 5 was one of the most influential sci-fi television shows in American history, it is third only to the original Twilight Zone and Star Trek. Oh and that isn’t my opinion, it is an actual fact according to the World Science Fiction Society during the presentation of J. Michael Straczynski’s second Hugo Awards. But if you don’t believe me I suggest reading this article on SyFy Wire, it does an excellent job of explaining the impact of Babylon 5 on American television. Great, now let’s move on to whether or not you should watch the show. Yes. Yes you should… in fact right now, stop doing what you’re doing and go bask in the glory of this show. If you need more than that, click on the link below and I’ll expand on my thoughts.

Babylon 5 was, simply put, a masterpiece. SyFy Wire’s article pointing out that the long format storytelling of pretty much all of sci-fi and fantasy that we enjoy today (and have enjoyed for the last twenty years) simply didn’t exist until J. Michael Straczynski’s Babylon 5. The sheer ambition of telling a five year long story had never been done before this, much less on free television. The story is sweeping in scope, the characters are complex and ever evolving for both good and ill. Some characters grow into the stuff of myth; others fall into a spiral of evil being redeemed by acts of great sacrifice. Nothing is simple, nothing is straight forward, and the pain of each character is as palpable their courage. It is the kind of show that demonstrates not just all of our foibles but our greatness. Where today’s television likes to revel in the darkness and depravity of its heroes, Babylon 5 gives heroes we can cheer for. Certainly the heroes have flaws and doubts, they are exceptionally human characters, but at the end of the day they are honest heroes who genuinely care for the world around them.

The core of the show could be summed up by two questions: Who are you? What do you want? I won’t reveal why they are important in the narrative, but thematically these two questions are asked of every character. The theme of order versus chaos and the inherent failures of both philosophies are played out as each character goes through addiction and loss, triumph and love, their reactions and growth in response to the epic saga playing out before them. If you like epic dramas that are character driven then you will not be disappointed in this series. Though, I will say the first season can feel a little slow, give it through season two. Let the story of the last of the Babylon stations take you on an epic tale through the rise and fall of empires for the future of the galaxy. You won’t be disappointed.

Just as an aside, since I won’t have this opportunity again, below is my suggested watch order:

The pilot movie The Gathering - There were a lot of changes made to the set and costumes once the show went into production but it is still cannon and helps you understand the world you’re stepping into.

Season 1 - The first season is slow to be honest, but it does slowly build the universe and begins to give you hints at the secrets that are being held by each character and the looming threat that lurks in the shadows.

Season 2 – 4 - Where the show really takes off and each season is better than the next with the climax being season four.

Season 5 - I will admit that some believe that season five should be skipped, and it certainly isn’t my favorite season, but it does set up the spinoff series Crusade and is crucial to understanding several of the movies, so it is worth a watch.

As for the movies…

In the Beginning and Thirdspace can be watched between season 3 and 4 or even after season 4 if you’d like, but I kind of liked using these two as a pallet cleansers for season 5.

River of Souls and A Call to Arms are excellent and next on the list and should be seen before the one season of Crusade (A call to Arms is the pilot for the series) .