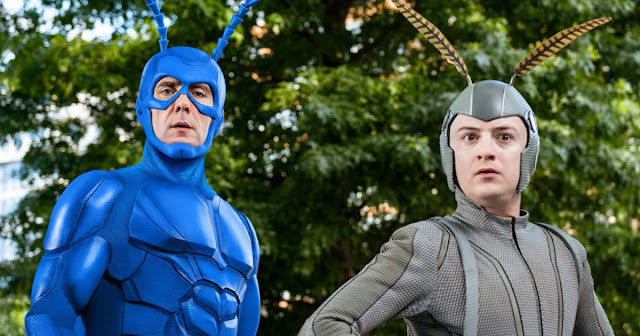 I was going to do a review of the Tick season two on Amazon Prime (and I still will) but since a lot of people may not have seen it yet I felt like I should do a spoiler free review of the series first. So, as always the lead question is: “do I like this series?” My answer is an emphatic, “You bet your binge-watching briefs I do!” For those of you who don’t know, the Tick was (and still is) an independent comic book that was a parody of the superhero genre. It spawned a successful Saturday morning cartoon show, and a less successful live action show starring Patrick Warburton. Even though Warburton was perfect for the role, the show just wasn’t very good because it stuck too closely to the source material. What works on paper doesn’t always work in live action sitcoms, and it is clear that Ben Edlund (creator of the Tick) learned from that experience when he brought the show to Amazon Prime.

Aside from Tick’s trademark personality and love of Adam West-ian exclamations, literally the only aspects of the original material to make it into this show is that the Tick is nigh invulnerable, super strong, and cannot remember his past. That’s it. This show is absolutely nothing like the comic, for example, Arthur is the main character and point of view for the show, not the Tick. Dot, Arthur’s sister, is cool and highly attractive, where she’s previously been depicted as... well, not. The Tick tracks down Arthur, drafts him into the superhero life, and gives him the flight suit which he initially rejects. In the comics Arthur is on leave from his accounting firm for becoming mentally ill and he buys the flight suit at an auction, his becoming Tick’s sidekick occurs only after he’s tracked down and helped the Tick. The thing is, these massive changes all make this show amazing.

Arthur as the protagonist makes sense, we can identify with him and his point of view; while also sharing his fear of embracing his deepest desire to become a hero and possibly lose the life he has. This battle between being what you’re told to be and being the exceptional thing you were meant to be is the heart and soul of this show. Griffin Newman’s portrayal of Arthur is simultaneously comically endearing and heartbreaking when juxtaposed with Peter Serafinowicz’s charismatically boisterous and optimistic Tick. Season one is particularly poignant and downright motivational at times with Arthur learning (literally and metaphorically) how to fly, to embrace his dreams; while season two shows how easily one can compromise their dream in its pursuit. Long story short, go watch the show and have a good time.
Newer Post Older Post Home