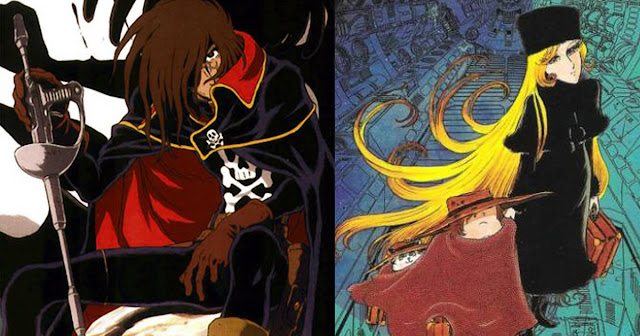 Attention Harlock: Space Pirate fans and those who enjoy old anime (y’know back when it was weird… well… weirder… ) I have a suggestion for you! Currently free if you have Amazon Prime (given the benefits like free shipping I do suggest looking into it if you don’t) are: Arcadia of My Youth, Galaxy Express 999, and Adieu Galaxy Express 999. The first movie is the origin story for the infamous space pirate Harlock, while the last two center around a young orphan boy, a beautiful, but mysterious, benefactor and their journeys on the space train Galaxy Express 999. Yes, you read that correctly, a “space train” an actual steam powered train in space… I told you old anime could get weird.

The first film explores who Harlock is, what his motivations are, and the events surrounding his taking up of the mantle of space pirate. It is a little slow and convoluted by today’s standard, but if you’re into old anime you’ll appreciate it. As for the last two, though Harlock doesn’t star in them he does play a prominent role and the lead characters aboard the Galaxy Express 999 have an immeasurable impact on his story overall. The films are fun, a bit disturbing at times, and ask a bit of the audience as everything isn’t just laid before you. So if you like not setting your brain to idle, or you’re a fan of anime where everyone isn’t screaming, “this isn’t even my final form” every five minutes, then give these three films a try.
Newer Post Older Post Home