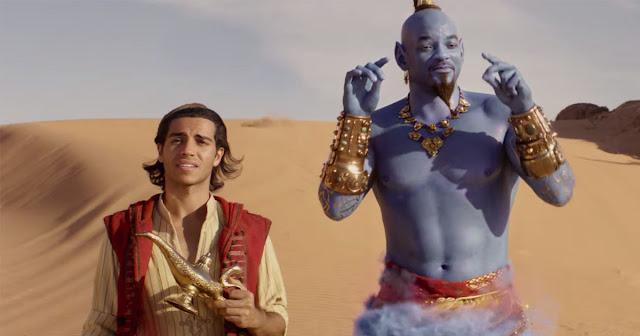 Let’s not bury the lead here, Disney’s remake of Aladdin is clunky but fun and enjoyable for children (below 13) or adults who go in with very low expectations. While I’m not certain that co-writer and director Guy Ritchie knows how musicals work It doesn’t stray too far from the original, it is legitimately funny (at times), it has little to no actual violence and two action sequences that were very well done. My opinion, is you should go see this movie if you have kids and want to take them to a movie that they will appreciate and won’t bore you to tears (as can be the case for kid’s films).

The question I had going into this movie was: Is this an honest attempt to bring this classic film to the big screen for the younger generation and respect the special place the original has in the hearts of the adults seeing it, or is it a soulless cash grab? The answer is: Sadly, both. In many ways, this movie feels like it can’t decide if it is trying to reimagine this beloved film or just copy it to be safe.

There are subtle changes that work very, very well like Navid Negahban’s Sultan being a competent ruler who is trapped by tradition and his manipulative vizier; Agrabah being a port city; Marwan Kenzari’s Jafar being a former thief and street rat like Mena Massoud’s Aladdin; as well as two new sub-plots revolving around a romantic interest for Will Smith’s Genie and the desire of Naomi Scott’s Jasmine to become sultan of the Arabian city-state. The film constantly fights with itself over these changes by becoming very rushed at the beginning and constantly stepping on its own narrative. But this conflict between imitation and originality is epitomized by Will Smith’s portrayal of the Genie.

Will Smith is an American film treasure and is amazing in everything he is in… and when Will Smith is allowed to be Will Smith in this film it is wonderful. He is funny, the scene flows, the interaction feels legitimate and genuine, in short: he steals the show. However, about half of his scenes Will Smith is forced to imitate Robin Williams… which feels like Will smith imitating Robin Williams. When the film is honoring the original film and going its own way with the story the movie is great, but the scenes it copies from the original feel rushed and awkward.

As I said at the beginning, the movie is clunky and I don’t know that Guy Ritchie knows how to direct musicals, but even for its many flaws Disney’s Aladdin is fun and enjoyable. Any child you take will enjoy it and give you the opportunity to remember the magic of imagination through the joy in your younger compatriot’s eyes… which is what Disney has always done very, very well.