Documentary Review: Terror in the Skies 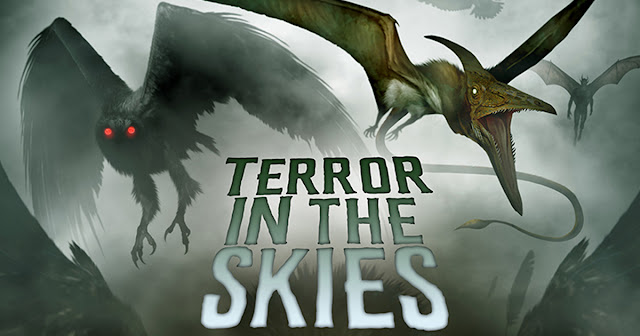 Seth Breedlove’s Small Town Monsters continues its series of paranormal / cryptozoological documentaries with its newest work Terror in the Skies. Narrated by Ghoultown front man Lyle Blackburn (a noted cryptozoologist in his own right) the film explores the Illinois region’s airborne phantoms and abnormalities through recreation of eyewitness testimonies recorded over the centuries and interviews with prominent cryptozoologists like Loren Coleman, Ken Gerhard, Troy Taylor, and others.

As an enthusiast of such phenomena I really enjoyed this new entry into the Small Town Monsters library of films and fans of the Small Town Monster series or shows like Finding Bigfoot or Ghost Hunters will appreciate it as well. But the genius of Terror in the Skies is that it will be enjoyed by those who have no interest in these kinds of phenomena or don’t like documentaries. This is really one of the best, if not the best, films in the genre and it can be enjoyed by anyone regardless of age or interest. The recreations that were brought to life by SRV Films and Santino Vitale (VFX) along with Matt Harris and Brian Serway’s illustrations are on par with anything in the genre. Mr. Blackburn’s narration is spot on for the feel of the documentary, and the pacing of the narrative is excellent.

In fact, let me expand on that last comment for a moment. For a film that is only 68 minutes long it is strikingly packed solid with detailed and in-depth information, yet It never feels slow. Seth Breedlove has crafted this film in such a way that the information becomes part of the narrative; so where many fail at balancing information with entertainment, Mr. Breedlove succeeds at it in spades.

In short, go get this movie! Support this film so Seth Breedlove can make more just like it! You will not be disappointed. Terror in the Skies will be available to rent or own on Amazon Instant Video, Vimeo OnDemand, DVD and VIDI Space starting June 7th, 2019.