When Detective Dee and the Mystery of the Phantom Flame hit in 2010 starring Andy Lau, it brought together the martial arts epic period piece and blended it with the hint of Sherlock Holmes and fantasy to create something great from director Tsui Hark. In 2013 Hark returned to the franchise with the prequel film Young Detective Dee: Rise of the Sea Dragon with Mark Chao stepping into the role as Dee. Now Hark and Chao are back for the latest entry Detective Dee: The Four Heavenly Kings, but does it bring more of the same fantasy and mystery or will it be a case he can’t solve?

Detective Dee: The Four Heavenly Kings follows the detective embroiled in his most difficult case yet. Accused of wrongdoing by Empress Wu, Detective Dee must defend himself against this formidable foe, all while investigating a crime wave that has engulfed the city, marked by strange and seemingly supernatural occurrences. While I still prefer Andy Lau in the role, Marck Chao has made it his own and really delivers this time around. The story keeps the fantasy and creatures at the forefront making for a great time. The story has an initial slow build before fully launching into the action. The visuals are as amazing as ever, creating a beautifully stunning period look to the time. The film was clearly shot for 3D which makes some of the CGI look a bit off in standard format, but doesn’t take too much away from the finished product as is. 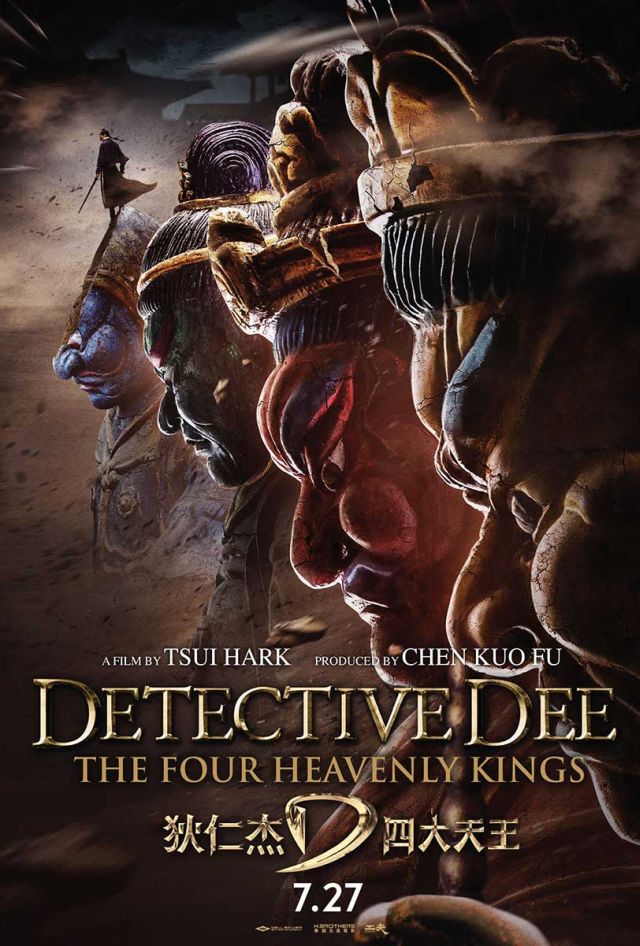 There is plenty of martial arts action to break it up from time to time to keep viewers intrigued with some cool designs and weapons that made me think of the old Shaw Brothers films like Five Element Ninjas. The ending of the movie goes all in with a full on creature fantasy fight that is fun to watch making this another fun chapter in the Detective Dee franchise.

Review by Bobby Blakey - Bobby reviews way more movies on his own website than the genre-specific ones I post here. Check out Bobby's awesome website and his live show he co-hosts with his wife, Drusilla, at Hollywood Matrimony.